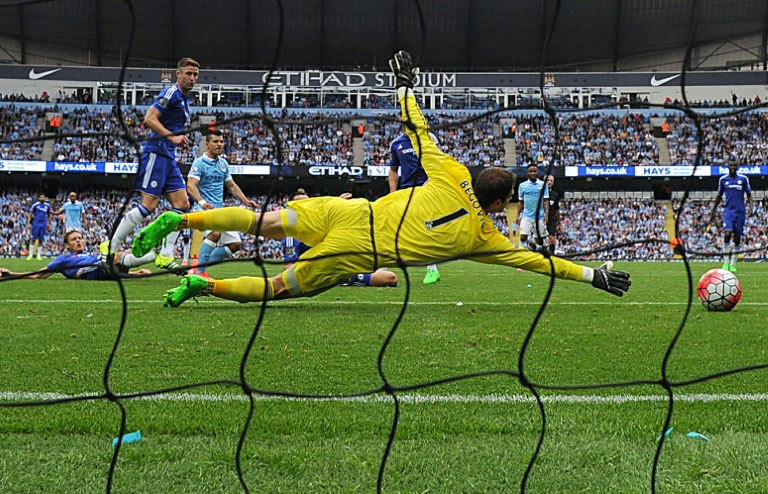 MANCHESTER, August 16- Manchester City deepened the gloom at Chelsea with a rousing 3-0 victory at the Etihad Stadium on Sunday that took them five points clear of the Premier League champions.

Sergio Aguero opened the scoring in typically deft fashion in the 31st minute before late goals from captain Vincent Kompany — his second in two games — and Fernandinho signalled the end of a breathless, spiky contest.

The result brought the curtain down on a bleak week for Chelsea manager Jose Mourinho, caught in a storm over his demotion of team doctor Eva Carneiro and head physiotherapist Jon Fearn and who withdrew his skipper John Terry at half-time for the first time in 177 league games.

But it was a day to savour for his City counterpart Manuel Pellegrini, whose side went top of the table as they marked the opening of a new 6,000-seat tier in the South Stand with a performance that suggested they have dislodged Chelsea as the English top flight’s team to beat.

After angering Mourinho by running on to treat Eden Hazard when Chelsea were down to 10 men in last weekend’s 2-2 draw with Swansea City, neither Carneiro nor Fearn were present on the visitors’ bench, but as the home fans would demonstrate, they were very much there in spirit.

Aguero had not been deemed fit enough to start in last Monday’s 3-0 win at West Bromwich Albion, but he returned to the starting XI in place of Wilfried Bony and was immediately in the thick of the action.

Less than a minute had elapsed when David Silva pierced the Chelsea defence with a through ball, but Aguero’s attempt to nutmeg Asmir Begovic — standing in for the suspended Thibaut Courtois — was unsuccessful, the ball cannoning back off the Bosnian goalkeeper’s left knee.

From the rebound, Jesus Navas drilled across goal and wide, but the pattern had been set and Aguero would go close on a further three occasions before finally breaking through. Silva cut in from the right and found Aguero, who laid the ball off to Yaya Toure.

The Ivorian’s return pass reached Aguero at chest height, but he chested the ball down impeccably before easing past Nemanja Matic and rolling the ball inside the left-hand post.

All Chelsea could muster in response was a low shot from Cesc Fabregas that flashed wide and Eliaquim Mangala almost made it 2-0 when he headed fractionally wide from the impressive Aleksandar Kolarov’s free-kick.

Begovic accidentally caught Gary Cahill in the face with a punch as the ball flew in and the sight of Chelsea’s new medics, Chris Hughes and Steven Hughes, scampering on drew a torrent of ironic applause from the home fans, who baited the hapless pair with chants of ‘You’re getting sacked in the morning!’ and ‘Eva! Eva! Eva!’

There were more cheers seconds later when Diego Costa went down after being caught by an elbow from Fernandinho, obliging City’s medical staff to go to his aid, but the snarling Spain striker did not see the funny side and went after his assailant as the teams went down the tunnel at half-time.

The teams’ re-emergence proved no less remarkable as Terry left the fray, with Kurt Zouma taking his place.

Ramires thought he had equalised, only for his celebrations to be cut short by an offside flag, and despite Chelsea’s need for a goal, City continued to threaten, with Toure and Aguero going close.

Chelsea sharpened their attack by sending Juan Cuadrado on for Ramires, City firmed up by introducing Samir Nasri for Navas, before Hazard spurned a chance to equalise, shooting straight at Joe Hart from Costa’s cut-back.

But as Chelsea readied Radamel Falcao, Kompany climbed highest at the near post to direct Silva’s corner inside the right-hand post before Fernandinho’s 20-yard drive put the game to bed.