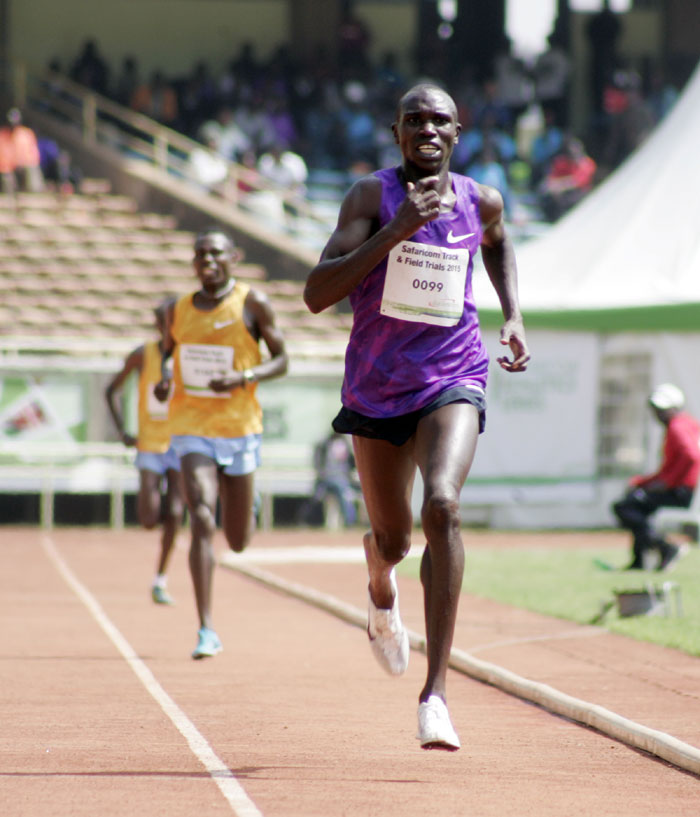 NAIROBI, August 1- From the onset, it was the men 10000m squad all gathered at Nairobi Safaricom Stadium on Saturday morning wanted to fly the Kenyan flag at the Beijing IAAF World Championships and at the end of superlatively fast 25-laps, they got it.

Their task in China when the Worlds run from August 22 to 30 will be to win the title last held by retired legend, Moses Tanui, who bagged the glory in the 1991 edition, when they were still infants.

Having detached themselves from the rest of the deep field with six laps to go, the seasoned trio motored around the red tartan like a stroll in the park, talking to each other in elastic banter, giving room for each other to do the front running before the bell.

With 600m to go, the World Cross and World Half titleholder, Kipsang, once again deployed his furious finishing power to speed away from Karoki with Tanui, with no challenger in sight for third, dutifully following them to the line.

The casual manner they ran the closing laps at the high elevation of Nairobi belied the times they returned at the end, 27:11.89, 27:15.33 and 27:33.45 in that order, good enough to win the Worlds in the clearest indication yet Kenya means business in China.

“The colour of the medal does not matter. Our aim is to win the 10,000m title and God willing, we can do it. We were talking to each other to encourage each other and see how it can be in Beijing,” the winner said.

“If we go to China and run like today, we can bring home all the medals. Team work is the most important thing to realise our dream. We did it in China and we are happy Paul has joined us,” Karoki emphasised.

“For me, I’m glad to be with guys we can go and run together and it feels good to be back in the Kenyan team. If we repeat what we did today, it’s possible to come home with all medals,” the Moscow 10,000m bronze winner added.

It did not take long for three front runners to drop the rest of the field that at the start, had distance running studs such as two-time New York Marathon champion, Geoffrey Mutai, former World Junior champion, William Sitonik Malel and 2010 African Championships silver winner, Vincent Yator.

Tanui was the first to push the pace as Karoki sat back in the opening laps with Kipsang content to stay round about the leaders. Japan based Paul Kuria Motero then took the front running duties until 11 laps to go when Karoki hit the front an uncorked a 66 second lap that finished the challenge of most pretenders.

The lead group of six was cut to four as they progressed before almost in a blur, the favourite trio made their own race that finished with their tickets to China assured.

That trio will likely do duty at the forthcoming Africa Games (formerly All Africa Games) with Athletics Kenya (AK) holding joint selection for Beijing and Congo Brazzaville.

In the eagerly awaited men 200m final, they all came to watch US-based Carvin Nkanata, who was starring at home for the first time ever but it was national champion, Mike Mokamba who ran with the glory in a storming 20.48 considering the punishing elevation of Nairobi.

Nkanata, the national record holder, followed him home in 20.82 as the effects of the high altitude took their toll with Peter Mwai (20.90) closing the podium.

“Having a guy like Nkanata inspired us to run to our best and given a chance to go to Beijing, my target is to qualify for the final round. I believe is the federation would facilitate us to train at a low altitude level, we can run times close to the likes of Usain Bolt and Justin Gatlin,” Mokamba, a son of 1968 Mexico Olympics 4x400m relay silver medallist, Elikanah Nyangau, said.

“It was good to be back home and competing. The guys here are fantastic and gave good competition, I was a bit surprised. The altitude made breathing a bit harder but I’m happy to come here and finish in a place for Beijing,” Nkanata, the National Collegiate Championships Association star in the US said.

On Friday, the pair were embroiled in controversy when their 100m final was hand-timed with the electronic timing machine controversially switched off.

The hand held clocks returned 10.23 against 10.48 with the sprinters, especially winner Mokamba feeling aggrieved that a chance to beat the A-qualification standard of 10.20 had gone by.