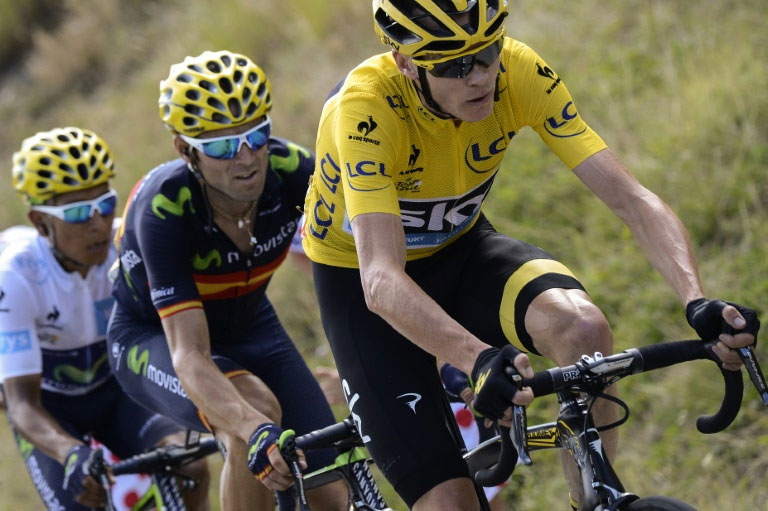 Christopher Froome (R) rides ahead of Spain’s Alejandro Valverde (C), and Colombia’s Nairo Quintana during the 16th stage of the Tour de France on July 20, 2015, between Bourg-de-Peage and Gap, southern France. PHOTO/AFP

Froome finished 28th on Monday’s 16th stage from Bourg-de-Peage to Gap, more than 18 minutes behind winner Ruben Plaza, but still had to answer doping-related questions in the yellow jersey press conference.

But the 30-year-old Briton suggested the treatment he gets is inconsistent with those of others when they enjoy success.

Since he won the Tour in 2013, four different riders have won the five Grand Tours held between then and the 2015 Tour.

American Chris Horner was 41 — a record — when he won the 2013 Vuelta a Espana but despite that success his RadioShack team let him leave at the end of the season and just over a year later he had to drop down to Continental Tour level (from the World Tour) to find a team.

Alberto Contador, who has served a two-year doping ban after testing positive for clenbuterol, then triumphed at the 2014 Vuelta and 2015 Giro.

But none of them have suffered the kind of scrutiny subjected to Froome in either his 2013 success or this year.

“But I’ve got to admit it is frustrating to an extent that if you look at the last five Grand Tours that have been won by different teams and different riders, there hasn’t been the same outcry for power data numbers, unless I’m missing something.

“Of course I don’t really understand why now it seems to be such a hot topic.

“OK, I won one mountain top finish by 59 seconds — it just seems strange to me.”

Froome has had urine thrown at him by a fan during the Tour, his Australian teammate Richie Porte was punched and others have been spat at, insulted and accused of doping.

Last year, Nibali won four stages at the Tour, including one by 1min 10sec to Thibaut Pinot.

Italian Nibali rarely put huge time gaps into his rivals but consistently gained time on them throughout the three-week race, which he led almost from start to finish.

By the end of the race, Nibali’s gap to second-placed Jean-Christophe Peraud was 7min 52sec and only three riders finished inside 10 minutes back from the Sicilian.

Froome won the 2013 Tour by 4min 20sec to Quintana and four riders finished within the gap between Nibali and Peraud.

Froome’s current lead over Quintana is 3min 10sec with another eight riders, down to Dutchman Bauke Mollema in ninth, within 10 minutes, although there are still four Alpine stages and 18 categorised climbs to come after Tuesday’s rest day.

Froome has been particularly critical of certain TV commentators — notably French former riders Laurent Jalabert and Cedric Vasseur — for comments linking him to doping and cheating, which he feels has influenced the common fan.

Not to mention the seeming obsession with his power data, which was even allegedly stolen after Sky’s computers were hacked.

Froome’s been backed by some important figures in cycling, including Tour director Christian Prudhomme, a former journalist.

“The top racer has never been liked in the history of the Tour de France. It was true with Jacques Anquetil, it was true with Eddy Merckx, and it’s being repeated now. But there must be a minimum of respect,” he said.

And the Professional Cyclists Association (CPA) president Gianni Bugno, a former cyclist, spoke up in defence of Froome.

“Gianni Bugno, President of the CPA, in reference to the recent incidents that involved Chris Froome at the Tour de France, condemns the behaviour of certain TV commentators who, accusing without any evidence the integrity of the riders, generate uncivilised and unbecoming behaviour of certain fans,” said a CPA statement.