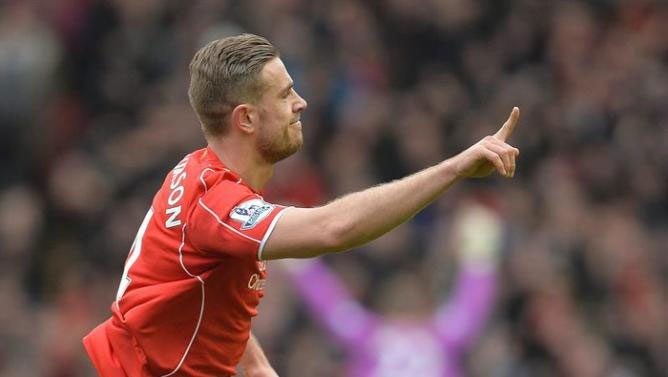 LIVERPOOL, March 5- Liverpool manager Brendan Rodgers said Jordan Henderson could aspire to reach an even higher level after the mid fielder’s impressive display in his side’s 2-0 victory over Burnley.

Henderson gave Liverpool the lead in the first half of Wednesday’s Premier League clash at Anfield when he powerfully struck a half-volley into the bottom-right corner from just outside the penalty area.

The stand-in Liverpool captain also provided a magnificent cross from the right flank for Daniel Sturridge to head in the hosts’ second goal after half-time.

Henderson’s all-round determination and drive have seen him singled out as the likely successor for the Liverpool captaincy when Steven Gerrard leaves for Los Angeles Galaxy at the end of the season.

As well as Henderson’s leadership qualities, Rodgers was equally complimentary about his growing ability as a player and believes there is no limit to what the 24-year-old England international can achieve.

“Jordan is improving all the time,” Rodgers said. “And as he matures he’ll become even better. He’s always had natural athleticism.

“But his technical ability, and tactically he’s improving all the time. He’s becoming one of the real leaders. It was a wonderful performance.

“It was a great strike for his goal, and the feed into Daniel Sturridge for the second as well. He is up there with the top assist-makers in the league.

“Jordan has very good technique. He is developing well as a player. He still has work to go, but he knows that. It’s great to see.”

Rodgers also believes Emre Can has the potential to become a world-class player after the versatile Germany Under-21 international produced another assured display at centre-back against Burnley.

Can, alongside Martin Skrtel and Dejan Lovren in Liverpool’s back three, helped the Reds keep a sixth clean sheet in their last eight Premier League matches.

Rodgers said: “You give Emre another couple of years and he could play in any team in world football.

“He’s strong, aggressive. He has football intelligence, power, pace, and he has great composure. He’s settling into the game in this country as well.

“He does the dirty work as well. I really think he’ll become a world-class player.”

Liverpool’s victory, their seventh in eight games, saw them regain fifth place in the Premier League and keep up the pressure on their rivals for a Champions League place.

However, despite their good form, Rodgers does not want there to be any let-up from Liverpool’s players between now and the end of the campaign.

“Over the last few months, the games have been coming thick and fast,” he said.

“It’s a period of the season we look forward to. We’re in a good position, but there’s still a lot of work to go. We’re at a good level and we want to continue with that.”

Burnley manager Sean Dyche acknowledged that his side were no match for a Liverpool team he believes are a much more intimidating prospect than the one that beat them 1-0 in December.

“They are playing with more clarity than earlier in the season,” Dyche said.

“They have players who can affect it, but they also pressed as well and did it with hard work. It’s a different side to the one we played on Boxing Day.”

The result left Burnley three points adrift of safety with 10 games left, but Dyche said he would have been happy with that scenario if he had been offered it at the start of the season.

“There is a reality to the challenge for us,” he said.

“We’ll keep learning, we’ll be ready to go again and be relentless to the end. I certainly would have taken the position we’re in with 10 games left. It’s the end which counts.”