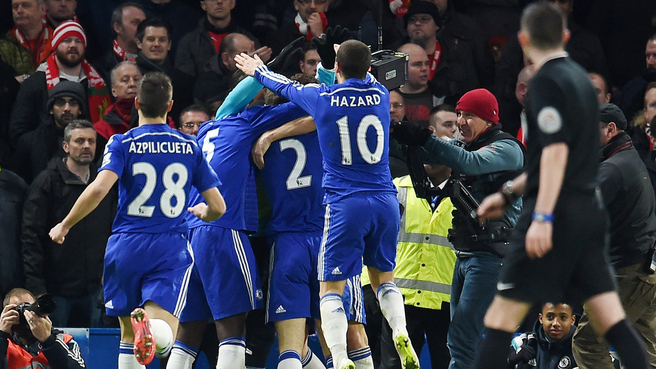 LONDON, January 27 – Chelsea manager Jose Mourinho once again alleged that his team were the victims of a “campaign” after they edged Liverpool 1-0 in an ill-tempered League Cup semi-final second leg.

An extra-time Branislav Ivanovic header earned Chelsea a 2-1 aggregate win after a high-octane encounter at Stamford Bridge on Tuesday, but it was home striker Diego Costa who was the focus of attention after the game.

The Brazil-born Spain international twice appeared to tread on opposing players — Emre Can in the first half, Martin Skrtel in the second — and could now face retrospective action from the Football Association.

Liverpool manager Brendan Rodgers said the incidents were “poor”, but Mourinho claimed the outcry had been manufactured by a television pundit who he refused to identify.

“I don’t know what you understand by ‘stamp’,” said Mourinho, who has been charged by the FA after claiming Chelsea had been targeted by a “campaign” over accusations of diving.

“I think maybe you (the media) are already influenced by — I’m going to use the word that put me in trouble — but I think this time I cannot be punished to say that there is a campaign on the television with a certain pundit that is saying (alleging) Diego Costa crimes.

“This guy must be nuts, the guy that is saying that.”

Mourinho appeared to be referring to either former Liverpool midfielder Jamie Redknapp or ex-Arsenal striker Thierry Henry, who analysed the game for Sky Sports, but he refused to reveal who he was talking about.

Rodgers had said: “On Emre Can, that was poor, I felt. He can easily hurdle over the young player there and he directs his studs right onto his ankle, which would have been nasty.

“And then the one on Martin Skrtel. There’s no need to do it. That’s the sad thing of it. He’s a top-class player and he’s clever enough the officials don’t see it. It was poor, really, by him.”

Mourinho worked alongside Rodgers during his first stint as Chelsea manager and he delivered a sharp response to his former protege’s remarks.

“He worked in Chelsea in my time for a few years, but we are very different persons,” said the Portuguese, whose side will face either Tottenham Hotspur or Sheffield United in the final on March 1.

“I don’t know if he learnt something with me or not. Maybe he did, maybe he didn’t.

“I could talk about Skrtel; I don’t. He goes to the television, he speaks about (Chelsea goalkeeper Thibaut) Courtois. He forgets (Liverpool goalkeeper Simon) Mignolet.

Mourinho claimed the morale boost generated by the win would counteract any fatigue ahead of Saturday’s Premier League showdown with title rivals Manchester City, but Ivanovic, Cesc Fabregas and Filipe Luis are all doubts for that game after sustaining injuries.

Fabregas and Filipe Luis were both forced off, but Ivanovic, who suffered a cut foot, stayed on.

“In this moment, I don’t know,” Mourinho said when asked to provide an early prognosis.

“Filipe was a calf and Fabregas was a hamstring, but Fabregas told me, ‘I’m not yet injured. I will be in a few minutes.’ So it was more of a precaution.”

Although Costa might have won a penalty after being caught by Skrtel, Liverpool created the better chances in the first half, with Courtois saving from Alberto Moreno and Philippe Coutinho.