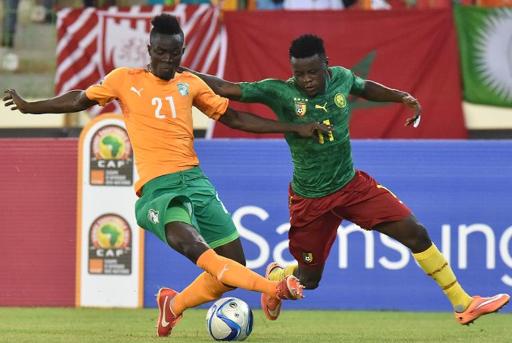 MALABO, Equatorial Guinea, January 28 – Max-Alain Gradel was the hero once again for the Ivory Coast on Wednesday as his thumping strike secured a 1-0 win against Cameroon and took the Elephants into the Africa Cup of Nations quarter-finals.

Gradel, whose late equaliser earned the Ivory Coast a 1-1 draw with Mali at the weekend, struck 35 minutes into the deciding Group D game in Malabo as Herve Renard’s men went through in first place to a last-eight tie against Algeria on Sunday.

With all four sides in the section coming into the final round of matches with identical records, the spectre of a drawing of lots to decide who went through to the last eight hung in the steamy night air of Equatorial Guinea’s capital.

But in the end such a lottery will only concern Guinea and Mali, whose 1-1 draw in Mongomo ensured they will need a lucky dip to see who advances along with the Ivorians.

With so much at stake for both sides, it was no great surprise that the early stages of the match at the Estadio de Malabo were somewhat cagey.

The Ivorians, who brought Gradel into their starting line-up after his starring role from the bench against Mali, were first to threaten though when Wilfried Bony diverted a Serge Aurier cross towards goal and Cameroon ‘keeper Fabrice Ondoa turned it behind.

Ondoa then made another decisive intervention to keep out an Aurier header from Gradel’s free-kick, before Elephants coach Herve Renard was forced into a change, with Ousmane Viera replacing the injured Eric Bailly in defence.

Nevertheless, they remained the more likely side in attack and they were rewarded with the opening goal 10 minutes before the break thanks to the livewire Gradel.

The Saint-Etienne winger collected a pass from Siaka Tiene on the left and advanced towards the edge of the box before unleashing a thunderous strike that flew past Ondoa into the net.

Finke had resisted the media clamour to hand a start up front to Clinton Njie, although he did introduce Franck Etoundi into his attack in place of Vincent Aboubakar.

However, it was Edgar Salli who passed up two glorious opportunities to equalise before the interval, first being denied by Sylvain Gbohouo and then contriving to blast over the bar after breaking into the penalty area.

In his defence, Salli had taken a knock shortly before and did not reappear for the second half, his place being taken by Aboubakar.

Yet as the clock ticked down, still it was the Ivorians who looked the more threatening side.

They nearly doubled their lead just after the hour when Nicolas Nkoulou failed to deal with a long ball downfield and was outmuscled by Bony, whose shot was blocked by Ondoa.

By this point Cameroon were playing with four forwards but their desperation to get a goal back did not translate into much in terms of chances, save for an Aboubakar free-kick that was boxed clear by Gbohouo, as they bowed out.