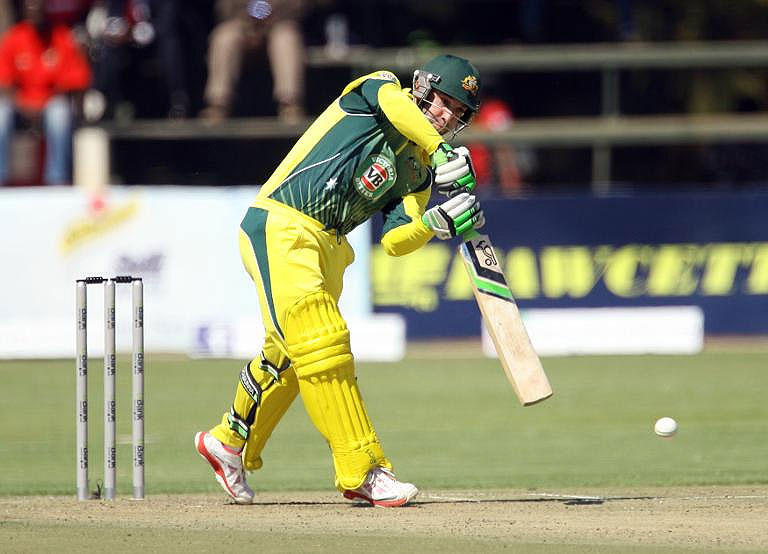 SYDNEY, November 25- Australian batsman Phil Hughes was in critical condition following emergency surgery on Tuesday after he was knocked out by a bouncer in a freak incident which shocked cricket.

The 25-year-old, who is pressing for a Test recall, crashed to the ground unconscious after the heavy blow to the head and was air-lifted to hospital from Sydney Cricket Ground.

Television images showed the helmeted Hughes, who had scored a composed 63 for South Australia in the Sheffield Shield game, standing dazed before going down face-first following the rising delivery from New South Wales bowler Sean Abbott.

New South Wales players, including Test colleagues David Warner and Brad Haddin, quickly rushed to his side and immediately called for help.

“He is undergoing surgery,” said David Faktor, a spokesman for St Vincent’s Hospital, where Hughes was taken. “He has sustained a head injury, he is in a critical condition.”

A hospital statement later said Hughes was out of surgery but remained in critical condition in intensive care.

Reports said he was in an induced coma and being treated to relieve pressure on his brain from bleeding.

Tim Nielsen from South Australia Cricket read out a statement from the Hughes family outside the hospital.

“The outcome of the surgery is unlikely to be known for the next 24-48 hours,” he said. “We would appreciate it if you would look after the family and friends and respect their privacy please.”

Cricket Australia said in a live match blog on its website that Hughes had “been leaving the short balls, had a go at this one, misjudged it and was hit in the head. He blacked out and fell badly”. The match was abandoned.

Medical staff worked on Hughes, including mouth-to-mouth resuscitation and oxygen, for more than 30 minutes before he was taken from the field ahead of a helicopter landing on the Sydney Cricket Ground pitch.

The accident, with Hughes’ mother and sister in the stands watching, sparked an outpouring of support for a player who is well-liked and respected in cricketing circles.

“Our thoughts and prayers are with Phil Hughes right now. We are also thinking of his family, team-mates and friends in the Australian cricket family,” said Cricket Australia chief James Sutherland, adding that the news “sent shudders” through him.

“We were obviously shocked to learn of the seriousness of the incident involving Phil,” he said, adding that counselling was being offered for all those involved.

Hughes made his Test debut in South Africa in 2009 where he made 75 in the second innings at Johannesburg. The left-hander followed up in the second Test at Durban with centuries in both innings, amassing some 275 runs at the crease.

The runs dried up and despite playing 26 Tests he has never secured a regular place in the team, partly due to his perceived weakness against the short ball.

But with doubts over the fitness of captain Michael Clarke for the first Test against India next month in Brisbane, he was seen as a potential replacement.

Clarke, a close friend, was one of those who reportedly rushed to the hospital to be at Hughes’ side.

National coach Darren Lehmann tweeted: “Our thoughts and prayers are with phil and his family. He is a great fighter and great young man.”