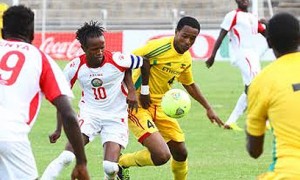 “Cecafa is a competition where no one can predict any team, Rwanda played very well against Uganda and Sudan, and it’s only that luck was not on their side.

“Kenya really need to give the Amavubi Stars respect, because they are a very good team, bearing in mind they came to this tournament having the full squad that participated in African Cup of Nations and World Cup qualifiers, but the rest of us we have brought development squads,” the former Amavumbi tactician urged.

Head coach Adel Amrouche is expected to field his strongest players against the Amavumbi Stars, despite the fact that the latter only won one match against Eritrea to qualify to the last-eight as second best losers.

Last year, Rwanda exited in the quarters after losing 1-0 to Tanzania and coach Erick Nshimiyamana said his charges will do better this year.

The two sides have met nine times in the regional showpiece, with both teams winning four times and drawing one.

In Sunday’s fixtures, the Chipolopolo of Zambia plays the Swallows of Burundi while the Walia Antelopes entertains Sudan at Mombasa Municipal Stadium.

“It will be impossible for the lake side City to host Cecafa semis because after touring the Kenyatta Stadium which is undergoing renovation, we found out that it will not be finished in time.

“After a day long inspection, we have come to the conclusion that it will not be possible to stage matches in Kisumu,” Musonye who said the stadium will take two months to be completed, confirmed on Friday.

Local Organising Committee is yet to decide the venue for semi finals.