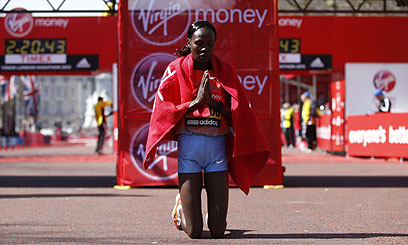 The Worlds and Olympics silver medallist who was lined up in the final squad alongside defending champion, Edna Kiplagat and Lucy Kabuu will be replaced in the squad by Paris Marathon bronze winner, Eunice Jepkirui with Margaret Alai still in the squad as a reserve.

Jeptoo, who turned 29 just a week ago, has asked for permission to take a break before considering competing in another marathon.

“I have to rest and I also told the same to Athletics Kenya. Luckily they agreed to release me after I had made the short list of four to go to Moscow for the World Marathon Championships in August,” she said Tuesday in Eldoret.

The World marathon silver medallist has just resumed training and cannot be ready for the Championships in time.

Athletics Kenya (AK) Deputy President David Okeyo confirmed Kiplagat will be brought into the team, despite not having been placed on the provincial list earlier announced.

The men’s team remain the same with 23-year-old Paris Marathon champion Peter Some designated as the reserve athlete.

He will be on the sidelines in the event that any of the three selected — 2012 Tokyo Marathon champion Michael Kipyego, 2009 World Half Marathon silver medallist Bernard Koech, who won Rock “N” Roll Half Marathon in 58: 41 and Bernard Kipyego, sixth placed at the 2011 Chicago Marathon.

Michael said he will be making an effort to work with the other members of the team and will sacrifice his own ambition to make sure the country retain the title that has been won by Abel Kirui in the last two editions.

“With a combination, we will do something good for this country in Moscow,” he said. “I believe we have the strength and skills to pull a surprise.”

“I am now polishing up on speed work. I had nice build up races in Lisbon and Rock N’ Roll half marathons,” Kiplagat added.

The marathon team will be coached by Richard Metto and Abraham Kiplimo and will be based in Iten.