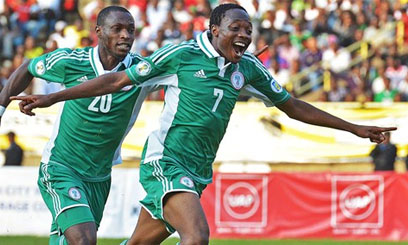 NAIROBI, Kenya, June 6- After Ahmed Musa’s immaculately chipped goal helped Nigeria win the 2014 World Cup qualifier against Kenya on Wednesday, he is pushing for a starting place in the Super Eagles squad for the FIFA Confederation Cup.

The Russian league side CSKA Moscow forward capped his imposing display as part of a three-pronged attack with the 81st minute strike that took Nigeria top of their Group F of their World Cup qualifiers on Wednesday in Nairobi.

“I had a point to prove and the game was very important to us that is why we went all out to do our best to win the game and in the end, we had victory and we feel happy as a team,” the man who netted his fifth strike for the Super Eagles stated.

In the absence of Chelsea forward Victor Moses and Spartak Moscow striker Emmanuel Emenike who were preferred by head coach Stephen Keshi in the 2013 Africa Nations Cup, Ahmed seized his rare start to impress his manager having come off the bench on a number of occasions.

His darting runs on the left wing and good link up play with fellow attacker Brown Ideye caused Kenya problems throughout the game and it was a surprise it took 81 minutes before their superiority finally counted.

After Kenya’s substitute winger, Stephen Waruru lost the ball deep in the Nigerian half, Efe Ambrose hoofed the ball forward and after it fell behind the central defence, Musa deftly lobbed the advancing keeper, Duncan Ochieng for the eventual winner.

“I saw the goalkeeper coming out when I wanted to play the ball. If I did not play it up, the chance would have been gone. I looked the ball and watched go into the net and it was one of the best goals I have scored for the national team,” the diminutive attacker said.

On whether his display against the stubborn hosts had convinced Keshi to offer him a starting berth in their next World Cup qualifier at home to Namibia and more importantly the Confederations Cup in Brazil, Musa left it to his manager to decide.

“We are like brothers in Nigeria. Everybody can start, for me, I’m a player and any time when I come, I give my best so I don’t think starting from the bench or first 11 is a problem to me,” he added.

“Every player I call since I became head coach of Nigeria can be used at the start or come in later depending on what we need in the game. Namibia will be different from Kenya for example,” Keshi clarified.

For Musa, scoring the goal, starting regularly and featuring in the Confed Cup will mean nothing if they do not achieve the ultimate aim.

“The World Cup is the important game. We don’t have to feel easy and we need to ensure we do well in the next game so that we can make ourselves comfortable.

“We have done the Nations Cup and we have to focus on the World Cup now.”