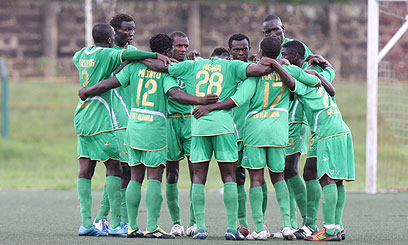 The Croat who sat dejected on the bench alongside his equally enraged assistant, Bobby Ogolla, rose to deliver a bitter indictment on his players who came close to being upset by the charged Homeboyz who prop-up the table in a feisty encounter that drew a sizable traveling contingent Green Army supporters.

“Some players have become comfortable, very comfortable at this club and changes are coming in June (transfer prayers). Those who are not willing to play for Gor will be out of the team. We have other players outside who want to come here and play.

“I’m disappointed that Dan Sserukuma and Rama Salim could not concert their chances and when I brought on Abbey Natti to try and score, he too could not. It is not that they were getting any good service either,” Logarusic stormed after the game that saw some disappointed K’Ogalo fans hurl alcohol at the Kakamega Homeboyz team bus along the Mumias-Kakamega highway.

“We had the quality and it did not show here. Our superiority was not seen on the pitch and we cannot continue losing points and letting down the fans like this. We have played six matches, won three, drawn two and lost one where we could have won those that we dropped points, Homeboyz gave 150 percent and we cannot complain they got a point, we gave little” he added.

Ogolla, a Gor legend echoed his coach’s sentiments adding that such displays would be costly for K’Ogallo as they seek to win the title they fell short of bagging at the death last season.

“We just took it very lightly and paid for it. Boys must change their attitude and play better football. When we play games teams like Tusker or Sofapaka, that is when we want to be serious. But I believe every game is important because it qualifies for three points with a win.

“If you are going to choose games to play hard and those to play soft, we miss the point and we will pay for it. Homeboyz were motivated for this game and we expected it but our players underestimated them,” the assistant coach decried.

Homeboyz who were also backed by their own tight group of core support left the match venue ruing what might have been had captain, Dennis Mukaisi and exciting substitute, Moses Mudavadi, taken any of the chances their well drilled midfield marshalled by Crestan Mwanzo, Gregory Nyampala, Chrispinus Mathenge and Daniel Njoroge created.

“We have played consistently for five matches so this was not extra-ordinary about it. Gor Mahia is an ordinary team, just a name. The difference between us and them has been seen on the field and we have reduced them to size. That one point really counts and at some level it will really help.

“I can assure you that there is progression in the team and this point will motivate us to achieve our objective of moving from the bottom and remain in the league,” Fred Serenge, the Homeboyz coach outlined.

Mudavadi, who left school last year, dazzled on the left wing after coming on for Samuel Misse in the first half and together with AFC Leopards player Mukaisi, kept Gor skipper Jerim Onyango in goal busy especially in the final ten minutes when they came close to sealing the win.

The captain’s turn and shot just over the bar hushed the Green Army who did not hide their disdain after their acclaimed striking duo of Ugandan Sserunkuma and Salim failed to spark.

“There is something wrong with Sserunkuma, I think some problem with the family and he is not focused. They want to take him back and when I took him off, I wanted to give our team the chance,” Logarusic said of his top-scorer from last season who is struggling to get his shooting boots on this term.

“KPL has become tough and all teams are prepared to not lose and we cannot afford to have players whose mentality is not with the team,” the coach added.

As for the fans who threw alcohol at their opponents bus, a chase ensued as the 14-seater van hired from Nairobi’s Huruma Nissan Sacco re-routed to the Butere-Kisumu road but after some 5km, the Homeboyz bus turned back to continue its journey to Kakamega.

The unsavoury provocation was a telling sign that patience is running thin among the Green Army troops who spare no expense to follow their beloved side with a return to the same region to play Muhoroni Youth next weekend on the cards.

“No, I will not keep my team here. We have to go back to Nairobi and there are five or six players waiting to replace these ones who cannot performed,” Logarusic icily responded to whether his team would be based at Mumias.

For Homeboyz, their upcoming dates in Nairobi against Sofapaka and Mathare United will give them another platform to challenge the might of the capital with wind on their sails.