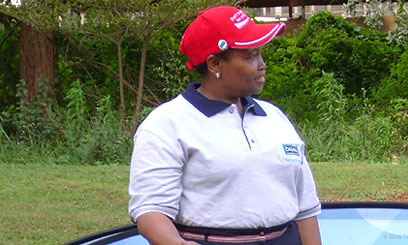 NAIROBI, Kenya, August 8- The team of Arthur Kamau, Mwangi Ngaru, Reverend Jacob Kamere and Ken Chege amassed 110 team points to win the 14th leg of the Dasani Golf Gala at the Nyeri Club over the weekend.

The event, attended by members of Nanyuki, Nyahururu and Nyeri was hosted by the Mt. Kenya Bottlers and the Coca-Cola Company.

He played conservatively through the opening nine holes, securing an average of 18-points. On the back nine, Kamau upped his game, firing an impressive 22 on what is generally considered to be one of Kenya’s toughest golf courses.

Ken Chege was the team’s weakest link with 32. With this victory, the team of Kamau, Ngaru, Kamere and Chege will now represent the Mt. Kenya Bottlers at the Dasani Golf Gala Grand Finale to be held on the 27th of August 2011 at the Karen Country Club.

“Last year, our team did not play very well at the Finale, this year, I would like to encourage our team to put in more practice and ensure they win the Grand Prize at Karen.

“I would also like to thank the golfers from Nanyuki and Nyahururu who travelled to Nyeri to be with us and a big thank you to Nyeri Club for hosting this event.” Mt. Kenya Bottlers CEO, Joyce Macharia said.

The prize for the best individuals not in a winning team went to Patrick Maina who finished with 38 beating Daniel Weru on count-back.

Samuel Kiragu (37) was third as Mercy Mburu topped the lady’s charts with 33.

The Gala now moves to the Eldoret Club where the Rift Valley Bottlers will play host to golfers from Kitale, Nandi Bears and Eldoret.

From there, the Equator Bottlers will host golfers from Kakamega, Kericho, Mumias and Kisumu at the Nyanza Club and the final qualification round will be hosted by the Kisii Bottlers at the Kisii Golf Club.

Qualifiers from all the Dasani Golf Gala legs will meet at the Karen Country Club on the August 27 to compete for the ultimate prize, the VIP trip for four to the TOUR Championship.