Sura Nne records has released a hot new riddim mix that is arguably one of the best riddims from Kenya.

The track, produced by Saomba, is titled the Heavenly Treasures riddim. The mix that caught our ears has four artists from the label singing over it. We spoke to the budding producer to find out more about the individual behind the riddim. Capital FM: Why did you choose that title (Heavenly Treasures) for the riddim?

Saomba: Well, I was a bit vexed by the status quo of the gospel music industry. Always talking about prosperity rather than laying emphasis on a personal relationship with Jesus Christ which is the most important aspect of salvation, not the fleeting material things of this world. Following Christ and his commands is how we lay up “Heavenly treasures” which cannot be destroyed by moth or rust (Matthew6:19-21). The way we treat others is what will show where our heart/treasure lies.

Capital FM: Apart from the current state of the gospel music industry, what else inspired you to create the riddim?

Saomba: I used to hate reggae when I was in high school though by the time I was clearing, I had developed a liking towards it. It kinda became a way of life especially being in a school like Pumwani Boys. We used to go for jam sessions and the music that was played was mostly reggae. I wondered how Jamaican producers were able to blend instruments so skillfully to come up with such a crisp Caribbean sound. I researched on it for a while then when I was ready, I tried and Heavenly Treasures is the result. I am working on a couple of other one-drop riddims too so keep an ear out.

Capital FM: Wait, so Heavenly Treasures is the first riddim you have ever produced?

Capital FM: That’s great! What else should we expect from you in the future?

Saomba: In terms of content, expect a lot of Christ-Centred music. I want to live as I have been called to live and that means speaking the truth about the gospel of Christ. Of course I’m an all rounded producer and artist so in terms of production, expect to hear a lot of hiphop, pop, dancehall and many other genres of music from me.

We will keep you posted on the individual songs once the label releases them. Meanwhile you can follow Saomba on twitter. 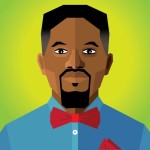 I am a Web and Graphic Designer who finds inspiration from nature and a beautiful girl called Mugure.