While Odinga insists his pledge is achievable with sound economic policies he intends to put in place, Ruto said “it s a way of introducing a hand-out economy.”

“What I am saying is being implemented in other countries like in the United States and parts of Europe. I am not day-dreaming, this cash transfer program will be a reality,” the Orange Democratic Movement (ODM) leader said during a campaign tour in Turkana Thursday, in response to criticism from his opponents. “This is not a joke and for the doubters I tell them that the plan will indeed work.”

“That is a lie. What he (Odinga) is promising cannot be sustained, and that is not what the youth and poor families need,” Ruto said, “what the youth need are jobs not handouts.”

“Again when you listen that you realise immediately that it is a lie from Raila,” Mudavadi said this week in an interview with Capital FM.

Odinga, Ruto and Mudavadi are all angling themselves to succeed President Uhuru Kenyatta who is serving his second and final term. Kenya will hold elections in August 2022.

The leaders have intensified campaigns since the beginning of this year.

President Kenyatta has made it clear he prefers Odinga, the former Prime Minister to be his successor after a bitter fallout with his Deputy Ruto whom he asked in August 2021 to “resign instead criticising the government he serves from within.”

It is understood that Kenyatta wants Mudavadi, Kalonzo, Moi and Wetangula to back Odinga but they remain adamant, vowing to produce a candidate under their One Kenya Alliance (OKA).

On his tour of Turkana on Thursday, Odinga said his plan to offer Sh6,000 monthly to poor families and the youth will go a long way in bridging the poverty gap.

On Wednesday, Odinga told a public rally in Kamukunji that his plan aims to reach at least 8 million people in just one year after its rollout

“We have a plan to ensure that we get to resuscitate the economy and Kenya to progress. We can and I am ready if I am told to continue with this endeavor,” he said.

But speaking in Kwale, Ruto, who has fashioned himself as a saviour for the struggling lot in the society, said Odinga is duping Kenyans.

“I want to remind him (Odinga) that hustlers are not poor people who are just waiting to be given handouts. The hustlers want to be empowered financially through the creation of empowerment programs that will put money in their pockets,” he said.

He stated that the 2022 contest had shaped up to be that of empowering the youths through his bottom up economic model and that of giving handouts as proposed by Odinga.

“I want to ask Kenyans to choose wisely and not to be duped,” he said. WASHINGTON, USA Oct 14 – US President Joe Biden was to meet Thursday with his Kenyan counterpart Uhuru Kenyatta, the first African leader invited to... 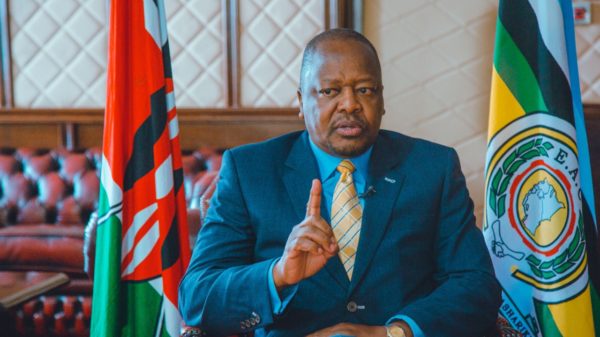 Kagwe to Kenyans: Choose your next president wisely

NAIROBI, Kenya, Oct 14 – With less than a year to the 2022 election, Health Cabinet Secretary Mutahi Kagwe has cautioned Kenyans to choose...