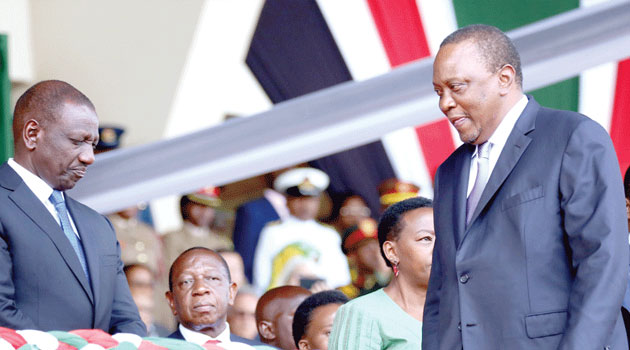 Ruto said he is ready for the talks and won't set any conditions because "President Uhuru Kenyatta is my boss and we were elected together." /FILE
41
SHARES
ShareTweet

NAIROBI, Kenya Sep 16 – Deputy President William Ruto has welcomed the Catholic Church offer to mediate the rift between him and President Uhuru Kenyatta.

Ruto said he is ready for the talks and won’t set any conditions because “President Uhuru Kenyatta is my boss and we were elected together.”

“Church leaders have said they want to reconcile us with the president, I am ready early in the morning with no condition because I respect the president. He is my boss,” Ruto said at his official residence in Karen on Thursday when he addressed a delegation.

He was responding to an offer by the Catholic Bishops to bring the two leaders together after months of an acrimonious relationship which Ruto and his allies blame on the president’s dalliance with former Prime Minister Raila Odinga.

“We are deeply concerned that if this open disagreement between the President and the Deputy President is taken up by their supporters, the trickle-down effect it could generate across the Country will be dire to even contemplate,” 23 bishops meeting in Nairobi under the banner of Kenya Conference of Catholic Bishops (KCCB) told news reporters on Wednesday.

“In a young democracy like ours, it is important that there is unity among the top leaders as this gives confidence to the people,” the bishops who included Archbishops Anthony Muheria and Philip Anyolo said.

On Thursday, Ruto said he has no problem with the president, “It is some conmen who came in between us and spread a lot of propaganda and they started telling the president to put his Deputy aside.”

“But I have no problem, I am ready to work with the president to complete our agenda on the pledges we made to the people,” he said.

Without mentioning names, Ruto said, “people who were not elected by the people cannot come and claim a share of the government.”

Last month, President Kenyatta urged the DP to resign instead of criticising the government he serves from within but Ruto has said he will not quit.

Differences between President Kenyatta and his Deputy Ruto escalated soon after the Head of State shook hands with Odinga in March 2018 when they buried the hatchet following a divisive election in 2017 in which the former PM claimed the vote was rigged in Kenyatta’s favour and even petitioned the Supreme Court which cancelled it and ordered a fresh election.

After the handshake, Kenyatta and Odinga initiated a process to change the Constitution under the Building Bridges Initiative (BBI) which they billed as a unity bid to end perennial conflicts during and after elections but the process was declared null and void by the High Court’s constitutional court, a decision upheld by the Court of Appeal. BBI proponents have filed a challenge at the Supreme Court.

Ruto has always been opposed to the bid to change the laws, terming it a waste of time.

In recent months, Ruto has been missing from key government meetings including recently a bilateral session between Kenya and Estonia at State House Nairobi where President Kenyatta was joined by several Cabinet Secretaries for official talks with President Kersti Kaljulaid.

This and many other signs are what led the bishops Wednesday to offer meditation.

The church leaders stated that the strained relationship between the two leaders poses a huge threat to the stability of the country as it edges closer to the 2022 general elections.

“The public exchanges that are being witnessed are dangerous for the prevailing peace and tranquility in the Country and cannot be taken lightly. They are already creating anxiety among the people and have potential to ignite political violence if not addressed with immediate effect,” they said.

The bishops further called on President Kenyatta and his deputy to seek ways of reconciling of for the sake of the country and its citizens adding that they were ready to lead the talks between them to find ways of repairing their relationship.

The bishops further advise Kenyans to remain united and avoid being manipulated by the political leaders to engage in violence.

“We also call on all Kenyans to desist from following political leaders blindly. We must not allow ourselves to be manipulated by leaders to engage in violence or perpetuate negative ethnicity because we all belong to this one great Country called Kenya,” they said. Mismanagement of diversity a threat to global peace and security: President Kenyatta