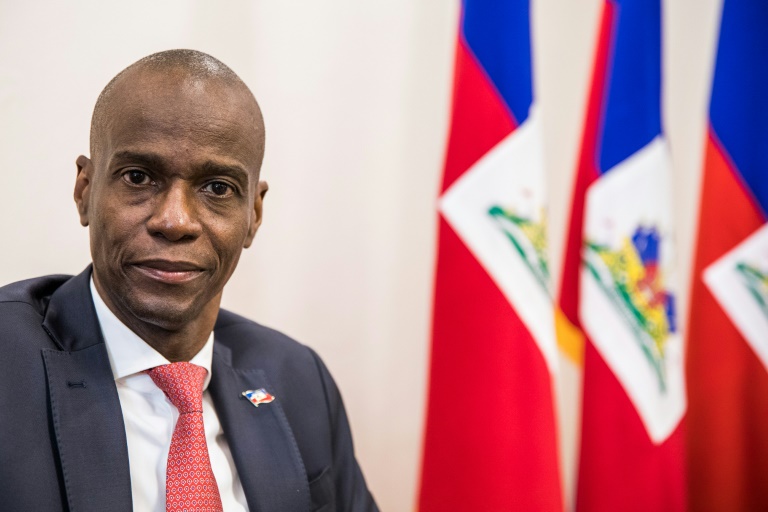 Haitian President Jovenel Moise, seen here in 2019, was shot dead in his home in Port-au-Prince -- it is unclear who could next lead the country
0
SHARES
ShareTweet

Paris (AFP), Jul 10 – Three days after the assassination of Haitian leader Jovenel Moise, questions are mounting about how the power vacuum left by his sudden death will be filled, in a violence-wracked country with no working parliament and no workable succession process.

The following is a look at what could happen next in the impoverished Caribbean nation, which was already mired in a deep political and security crisis when the slaying — its motive still unclear — took place early Wednesday:

Factfile on Haiti’s President Jovenel Moise who has assassinated at his home on July 7, 2021 © AFP / John SAEKI

With Haiti’s executive branch brutally shaken by the murder of the president, the two other branches — the legislative and the judiciary — face enormous pressures in a country crippled by a grave institutional crisis for more than a year.

Moise had organized no elections since arriving in power in 2017, leaving Haiti with only 10 elected lawmakers, just one-third of the Senate, since January 2020.

His administration had also not nominated any replacements for members of the Superior Council of the Judiciary when their three-year terms ended — or after the council’s president died last month of Covid-19.

“As concerns the constitution, there is no possibility of finding a solution, for Jovenel Moise and his team had made sure to dismantle all the institutions,” said Marie Rosy Auguste Ducena, a lawyer with the National Network for the Defense of Human Rights.

“Whether you turn to the parliament or to the judiciary, there is nothing.”

– A duel to fill governing void – Haiti’s Senate leader Joseph Lambert (C) — seen here in 2018 — could be the country’s provisional president, but it is unclear if the resolution naming him is valid and can be enforced © AFP/File / Pierre Michel JEAN

Only hours after Moise’s assassination, Claude Joseph, who was named prime minister in April, announced that he was in charge, while declaring a two-week “state of siege” that gave him even broader powers.

“The constitution is clear: I have to organize elections and actually pass the power to someone else who is elected,” he said in English in an interview broadcast Saturday on CNN.

Haiti’s constitution states that in the event a president is unable to carry out his duties, the prime minister shall assume power. Only days before his death, Moise had named Ariel Henry to be the country’s next prime minister.

That nomination, registered Monday in the official journal of the Haitian republic, led some observers to question Joseph’s claim to power.

Facing the real danger of a national power vacuum, eight of the 10 senators still in office signed their names late Friday to a resolution nominating Senate leader Joseph Lambert to be the country’s provisional president.

They have some support from opposition parties, but the validity of the document — and how it can be enforced — is unclear.

“While there is no denying that the 10 senators are the only remaining 10 elected officials in the country, it is clear that they are not representative of the country,” said analyst Emmanuela Douyon.

Though Lambert is an experienced politician, he has also been a deeply divisive one.

“Senator Lambert has long been criticized,” said Ducena. “There are abundant rumors linking him to drug trafficking, and others regarding issues of his morality.” The UN once had a strong peacekeeping contingent in Haiti but no longer, after multiple scandals © AFP/File / JUAN BARRETO

Facing the sudden power vacuum, Claude Joseph asked the United States and the UN to send troops to secure strategic sites including seaports and airports, but a senior US administration official said Saturday: “There are no plans to provide US military assistance at this time.”

Even without going back as far as the US occupation of 1915 to 1934, which followed the assassination of then-president Vilbrun Guillaume, more recent foreign interventions have met with mixed success at best, in the eyes of most Haitians.

The United Nations maintained a sizable peacekeeping contingent in the country from 2004 to 2017.

“And since their departure, look at what is happening: the nearly complete gangster-ization of the nation,” said Douyon.

Armed gangs have tightened their grip over Haiti since early this year. Violent clashes between armed groups in western Port-au-Prince have forced thousands of fearful residents to flee.

The national police have launched only one major operation against the gangs, in March, and it ended in fiasco: four police officers were killed, their bodies never recovered.

“If there’s a need for reinforcements, it will be to clean out the ranks of the police — to salvage what is salvageable,” Douyon said.

As the country’s de facto leader since Wednesday, Joseph has the official backing of Helen La Lime, the UN special representative in Haiti. But her stance is deeply decried by many civil society leaders in the country.

“It’s not up to a UN representative to say, ‘This is who is in charge,’” said Douyon. “That reminds us of the colonial periods, and no one wants to live through that again.”

“After Black Lives Matter, after all these movements demanding reparations for slavery, this is no time for foreign forces to show they are trying to impose solutions on Haitians,” she said.