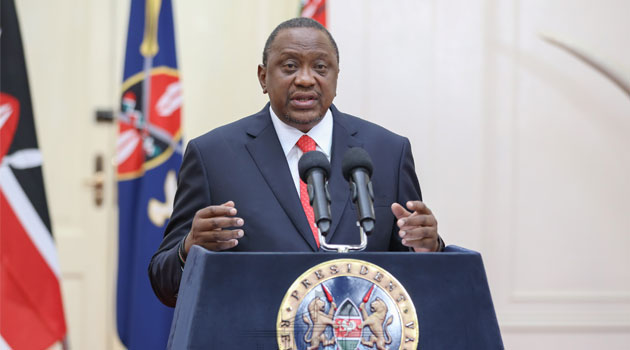 President Kenyatta eulogised Kirubi as a seasoned businessman, entrepreneur and industrialist who founded and successfully ran some of Kenya's largest corporations/PSCU
3
SHARES
ShareTweet

The President regretted that five decades after the 1968 Treaty on Non-Proliferation of Nuclear Weapons (NPT), an alarming number of nuclear weapons were still in existence.

“We continue to witness an increasing nuclear rivalry, modernization of nuclear weapons including their delivery mechanisms; and weakening of inter-governmental arrangements aimed at curtailing nuclear arsenals and their ultimate elimination,” he said.

The President’s message was conveyed in a recorded video statement delivered during the virtual High Level Plenary Meeting of the 75th session of the UN General Assembly to commemorate and promote the International Day for the Total Elimination of Nuclear Weapons.

Kenya is a state party to the African Nuclear-Weapons-Free-Zone Treaty and the 1996 Comprehensive Nuclear Test Ban Treaty.

The Head of State said the use of nuclear weapons is reprehensible and cannot be justified in any way as it goes against the basic tenets of humanity.

“As we approach the 10th Review Conference of the Non-Proliferation Treaty (NPT) in 2021, we call for renewed momentum among all our states to implement their disarmament commitments,” President Kenyatta said.

While commending the progress in the establishment of nuclear-weapon-free zones, the President called on nuclear states to join in the universalization of the NPT treaty and to commit to complete nuclear disarmament.

Guterres expressed concern that some of the programmes towards the total elimination of nuclear weapons have either stalled or are at risk of backsliding.

For the sake of security, the UN Secretary General stressed that the world must return to a common path towards nuclear disarmament.

“And states possessing nuclear weapons have a responsibility to lead in this endeavor including by fulfilling their disarmament commitments and by taking practical steps to reduce nuclear risks,” the UN Secretary General said.

The President of the 75th Session of UNGA, Volkan Bozkir, said the only way to eliminate the threat of nuclear weapons is by eliminating the weapons themselves.

Oslo (AFP), Jan 24 – In their first visit to Europe since returning to power, the Taliban held landmark talks with Western diplomats in... ‘I have no interest in Kenyan elections,’ Museveni says

NAIROBI, Kenya, Jan 24 – Ugandan President Yoweri Museveni says his government will not take any sides in the August general elections in Kenya.... KISUMU, Nairobi, Jan 24 – Kisumu Governor Anyang’ Nyong’o has given all County workers two days off to enable them mobilize their families and...