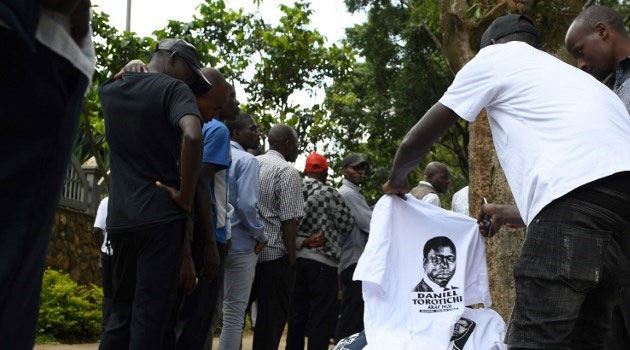 A man sells t-shirts bearing the photo of late former Kenya’s President Daniel Arap Moi, as civilians queue to view his remains, outside Parliament Buildings where it would Lie-in-State for public viewing, on February 8, 2020 in Nairobi. Former Kenyan president Daniel arap Moi, who ruled the country with an iron fist between 1978 and 200, died aged 95,

NAIROBI, Kenya Feb 9 – Queues started forming as early as 6am Sunday, on Day 2 of Moi’s body lying-in-state in Parliament for public viewing.

From Kencom House, through KICC on City Hall Way, Kenyans lined up, some with their children, through to Parliament Road where they waited for their turn to view the body of retired President Daniel arap Moi.

“Mzee Moi was a great man and he used to come to Kakamega more often,” said Philip Walubengo as he lined up, “I will remember him for opening a hospital in Webuye.”

Walubengo urged more Kenyans to turn up and “see the body of our former leader.”

“This is a one in a lifetime opportunity,” he said, when asked why he went to see him.

Kenyans started viewing Moi’s body Saturday when it was driven in on a gun carriage with the coffin drapped in the national flag.

It was taken back to the Lee Funeral Home and returned to Parliament on Sunday. The last day of public viewing is on Monday, ahead of his memorial service at Nyayo National Stadium on Sunday followed by a state burial on Wednesday when he will be accorded a 19-gun salute by the military.

Those interviewed by Capital News spoke fondly of a man who ruled Kenya for 24 years, with majority sharing nostalgic memories of the free milk program for public primary schools. Kenyans viewing Moi’s body in Parliament where it will lie-in-state for three days from Saturday February 8, 2020.

For some, like Mike Ouma, they attributed their academic success to the milk which they say acted as the only motivation to pursue education, at a time the government was battling high levels of illiteracy among Kenyans. “I hated education so much, but I went to school due to the free milk,” Ouma, who went ahead with education to acquire a Kenya Certificate of Secondary Education (KCSE) said. Hundreds of police officers, some on horse-back were deployed outside Parliament to manage the queues of Kenyans determined to view Moi’s body. There was tight security outside Parliament as Kenyans queued to view Moi’s body. /JOSEPH MURAYA,

Kennedy Ng’ang’a, a resident of Kabete pleaded with Kenyans to forgive Moi, saying he ruled at a time the country faced a myriad of challenges, that required him to be firm. “Why burden yourself with hatred?” he posed while referring to Moi’s striking last statement as he handed over power to his predecessor President Mwai Kibaki,” he said, and recalled Moi’s last words of “if I have done anything wrong, please forgive me, I also forgive those hurt me.”

A program released by Parliament on Friday states that Kenyans will have a chance to view Moi’s body from 2pm, after President Uhuru Kenyatta and other leaders, government officials and international dignitaries. Hundreds of police officers were deployed to Parliament during public viewing of Moi’s body. /JOSEPH MURAYA.

Moi died on Tuesday at the Nairobi Hospital where he had been admitted for more than three months following a long illness, associated with old age. He was 95.

Moi’s son Gideon and Raymond said “as a family, we have accepted.”

On Tuesday the gun carriage and state funeral procession will make its way from Parliament buildings to the Nyayo Stadium, the venue of the national memorial service where thousands of Kenyans are expected to attend. He will be accorded a state burial on Wednesday at his Sacho home in Kabarak.