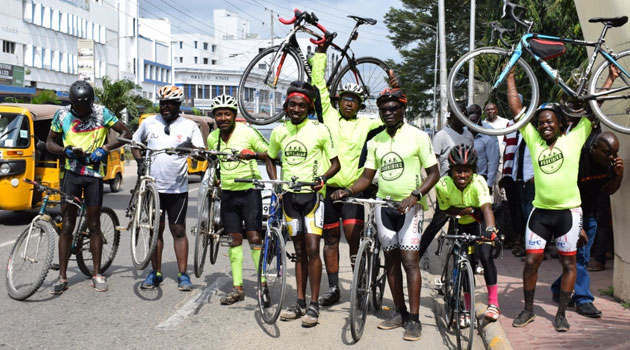 The six cycled 1,130 kilometres from Busia to Mombasa in a campaign dubbed ‘Gokibiko Starehe Charity Cycle Ride’ managed to raise Sh2.64 million against a target of Sh5 million/COURTESY

MOMBASA, September 7 – Four alumni of Starehe Boys Centre, a parent and a friend of the Centre on Saturday completed a ten-day cycling expedition across Kenya in aid of needy students at the institution.

The six cycled 1,130 kilometres from Busia to Mombasa in a campaign dubbed ‘Gokibiko Starehe Charity Cycle Ride’ managed to raise Sh2.64 million against a target of Sh5 million.

They started in Busia on August 27 and arrived in Mombasa Saturday morning where they were received by Mombasa Deputy Governor Dr William Kingi at Treasury Square.

Speaking afterwards, the founder of the expedition – Samuel Kibiko – explained they had undertaken the challenge to mobilize for domestic funding for the school that in mainly sponsored by foreign donors.

“A few years back, you would not have seen this kind of activity around Starehe because then the school was being majorly sponsored by the international community. But with time, that help has waned for different reason so it’s just like your parents- at some point, they have their income but in due time it ends and you have to go in and help and the alumni have had to come together.”

“And it’s not just the alumni, we cycled with a parent of one of the students currently in fourth form while another rider is just a friend of the school,” he added.

Funds raised in the cycling expedition will go towards the Griffin Memorial Endowment Trust (GMET) Fund.

The Trust manages endowment funds for both the Starehe Boys’ and Starehe Girls’ Centres, with a view to securing places for needy boys and girls in perpetuity.

The centre currently has in its care 1097 students from all 47 counties, 78 per cent of whom are drawn from disadvantaged backgrounds.

Over 14,400 boys have gone through the centre since its inception.

Kenyans are urged to support the cause by sending their contributions however small to: Mpesa:949494: Account: GoKibiko