NAIROBI, Kenya Aug 2 – National Super Alliance leader Raila Odinga has assured that he will be pursuing an out of court settlement in resolving the controversy surrounding Kibra MP Ken Okoth’s interment after a court was issued blocking it.

The orders were obtained by nominated Nairobi County Assembly Member Ann Muthoni Thumbi who wants the family to recognize a child she claims she bore with the deceased.

“The family has been very cooperative, I am sure we will come to an agreement about this issue, even at home where we are to rest Ken I am sure all will go well and we will rest Ken in peace as per his wish,” Odinga said during the Okoth’s memorial service held on Thursday at the Moi Girls High School in Kibra. 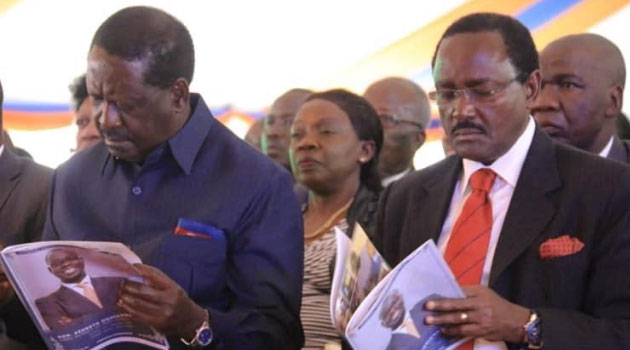 In the order issued by a Magistrate’s Court, Ken’s mother Angeline Okoth, his wife Monica Okoth were barred from undertaking any funeral rites for the deceased until the case is heard and determined. Lee Funeral Home where his body was preserved is also named as the third respondent.

“That in the interim, a temporary injunction be and is hereby issued restraining the first and second defendant, either by themselves, their servants or agents from conducting the burial, interment, cremation and or in any manner whatsoever dispose of the body or remains of the late Ken Okoth pending the hearing and determination of the instant application interparties,” reads an order issued by Milimani Senior Principal Magistrate Mmasi.

“Until this is done, nothing will happen concerning the late Okoth’s interment or cremation,” he said, and pleaded with Kenyans for “patience as we try to resolve this issue.” Ann’s lawyer Elkana Mugaka told journalists at the Milimani Law Courts.

Odinga has assured that they are confident the matter will be resolved amicably, with Wiper Leader Kalonzo Musyoka too rooting for dialogue.

Okoth’s funeral was set for Saturday.

The family was planning to conduct final rites for Okoth’s body in Homa Bay on Saturday, followed by a cremation which is also opposed by a section of his family members. Monica Okoth, the MP’s widow, is reported to be opposed to the idea of the boy being recognized publicly.

Okoth died last Friday at The Nairobi Hospital after a long battle with cancer.