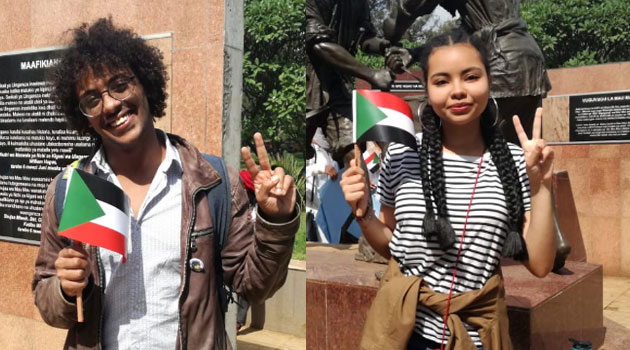 Mohammed Elnaiem, 26, (L), and Aida Abbashar, 21, (R) were among protestors who participated at a march in Nairobi’s Uhuru Park calling for civilian rule in Sudan/ CFM – JOSEPH MURAYA

NAIROBI, Kenya, Jun 19 – As the Sudanese conflict plays out on the global arena with the military and politicians taking center stage, it is easy to forget the lives of millions of people affected.

Mohammed Elnaiem is 26 year-old and came to Kenya early June after mass killings executed by the military, events that led to his decision to temporarily leave his country.

Elnaiem is not alone. Aida Abbashar, an American-Sudanese, 21, who is also living in Kenya is eqiualily concerned about the situation back home.

Both Elnaiem and Abbashar are in pain watching their countrymen back home undergo atrocities, under the hands of those who are supposed to protect them.

They both spoke to Capital FM News, ahead of a protest against civilian killings, planned by human rights defenders in at Nairobi’s Uhuru Park.

And their message to the youth’s in Sudan: “don’t give. Fight on.”

“The best day in our lives was seeing Omar al-Bashir fall from power,” Elnaiem said.

The joy of seeing a dictator fall after 30 years of an autocratic rule has kept fighting on.

“Our people have been killed, but we shall not stop agitating for our rights. We shall continue with the struggle for peace, justice and human rights in Sudan,” he affirmed.

His words were echoed by Abbashar, who was in the company of her mother.

She has an option of going back to the United States or staying in Kenya, but she said, “I want peace back home. Young people back home, please fight on. Don’t give up.”

“The youth’s are driving the revolution and this is the energy we have to keep up,” she said.

And it is not about the young people as evidenced by Capital News, as even the aged joined them, in agitating for human rights.

Mahmoud Yousif, 65, urged African leaders to speak against violence overseen by the Transitional Military Council and demand for ceasefire.

“It’s not about Sudan, it’s about Africa. Don’t turn a blind eye,” he asserted.

“The military should go back to our boarders and protect Sudan. We don’t want military leaders.”

This follows the killing of at least a hundred people by the Sudanese security forces early this month, when they cracked down on a sit in by pro-democracy protesters, outside army headquarters in the Capital Khartoum.

Protesters in Sudan have been agitating for an expeditious takeover of a civilian rule from the Transitional Military Council following the removal from power of President Omar al-Bashir on April 11, after an autocratic rule that lasted for three decades.

The United Nations Security Council has since called for immediate ceasefire.

On their part, the African Union suspended Sudan from engaging in all its activities until the effective establishment of a civilian-led transitional authority.

According to International media reports, locals now say “the military council has lost people’s trust” after the killings.

Since his ouster, the ex-President was for the first time seen on Sunday, when he was charged with corruption related offenses.

While he might be away from the seat of power, Sudan remains troubled with world leaders rushing against time, to stop the country from sliding into a failed state.