Kinshasa, Democratic Republic of Congo, Dec 26 – DR Congo on Wednesday announced that key elections due to take place nationwide on December 30 would be postponed to March in two regions troubled by violence.

But those delays will not affect the timetable for the presidential ballot, which is being held alongside legislative and provincial elections, the national election commission CENI said.

Already postponed three times, the elections are due to bring the curtain down on the era of President Joseph Kabila, in charge of the vast mineral-rich country for nearly 18 turbulent years.

“The elections in the Beni region and the cities of Beni and Butembo in North Kivu province as well as Yumbi in the (southwest) Mai-Ndombe province initially scheduled for December 30 will now be held in March,” CENI said.

The “final results” of the presidential vote will still be published on January 15, and the next president will be sworn in on January 18, CENI said.

It did not explain how this would dovetail with the outcome of the vote in the troubled regions, which would take place much later.

“This latest intrigue shows the regime wants to extend its stay in power to continue its plundering,” Moise Katumbi, a former governor of Katanga province who is backing opposition candidate Martin Fayulu, said on Twitter.

“They think we’re bloody idiots!” tweeted Leonie Kandolo, a member of a committee in the powerful Catholic church that staged three anti-Kabila rallies this year.

Roughly three percent of some 40 million registered voters will be affected by the delay.

The elections were due to have been held on December 23 after a long period of blood-stained turbulence.

But CENI ordered a week-long postponement, blaming a warehouse fire that destroyed voting machines and ballot papers earmarked for Kinshasa.

At a regional summit Wednesday in Brazzaville, the capital of the neighbouring Republic of Congo, five African heads of state expressed “strong concern over acts of violence” during DRC’s campaign.

The leaders of of the Republic of Congo, Angola, Zambia, Botswana and Namibia said in a statement that the violence in some regions was enough “to compromise voter’s peace of mind”.

There was no DRC envoy at the gathering of eight southern and central African countries, but they said a delegation of foreign ministers would be sent to Kinshasa to present Kabila with the summit’s conclusions.

Two and a half times bigger than France and Germany combined, the Democratic Republic of Congo has a long history of political turmoil and violence.

It has not had a peaceful transfer of power since gaining independence from Belgium in 1960. 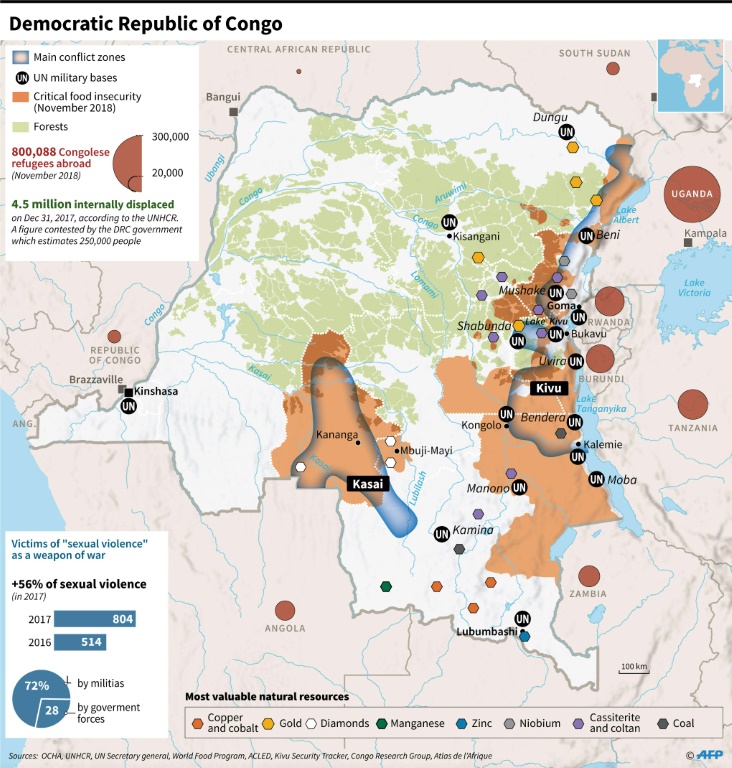 In 1996-1997 and 1998-2003 it became the theatre of two wars that left millions of dead and homeless and sucked in countries from around central and southern Africa.

Memories of the conflict haunt the region still. The CENI statement pointed in particular to parts of North Kivu province, affected by “a terrorist threat” and “a dangerous, ongoing epidemic of the Ebola virus” in the areas of Beni and Butembo. More than 350 people have died of the disease since August.

On the other side of the country, inter-communal clashes erupted this month in the southwestern province of Mai-Ndombe, causing at least 80 deaths and prompting thousands to flee to the neighbouring Republic of Congo.

Kabila took office in 2001 at the age of just 29 after succeeding his assassinated father, Laurent-Desire Kabila. Kabila’s decision to stay in power, invoking a caretaker clause in the constitution, sparked demonstrations that were brutally crushed © AFP / John WESSELS

His long spell has been sharply criticised by rights and anti-corruption watchdogs, and his final years were marked by protests that were bloodily quelled.

He was due to step down at the end of 2016 after reaching his constitution-limited two terms in office.

But he stayed on, invoking a caretaker clause in the constitution that enables a president to stay in office until a successor is elected.

The elections were postponed until the end of 2017 under a deal brokered by the powerful Catholic church — and then again until 2018, when Kabila eventually confirmed he would not run again.

Three men are seen as heading a field of 21 candidates for Sunday.