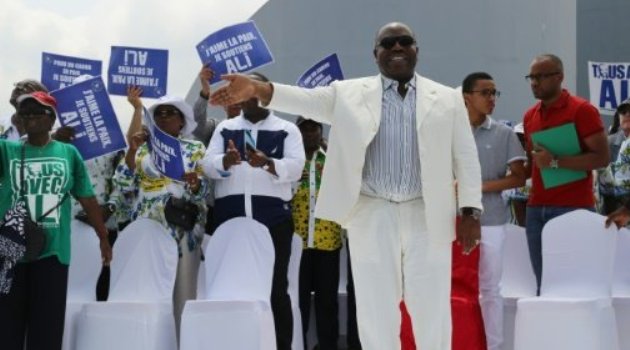 Ali Bongo took over from his father Omar Bongo, who ruled Gabon for 41 years until his death in 2009/AFP-File

LIBREVILLE, Gabon, Sept 27 – Ali Bongo was sworn in Tuesday as Gabon’s president after the country’s top court controversially validated his fiercely contested election win, taking his family’s reign over the oil-rich country into a fifth decade.

“I pledge to devote all my efforts for the good of the Gabonese people and to ensure their well-being… and respect and defend the constitution and the rule of law,” the 57-year-old said.

Cannons were fired during the ceremony in the seafront presidential palace in Libreville, as fears of fresh violence resurfaced.

The event was attended by a handful of African leaders including the presidents of Mali, Niger, Togo and Sao Tome as well as the prime ministers of Chad, Senegal, the Central African Republic and Morocco but most regional and continental heavyweights stayed away.

Government spokesman Alain-Claude Bilie-By-Nze said Bongo wanted to install “a unity government by this week or the start of next week”.

Bongo’s second mandate has received a cool reception from the African Union and the United Nations, while the European Union voiced regret that the count had not been transparent.

The Gabonese spokesman was dismissive of former colonial ruler France which sent its ambassador to the event.

“Whether they come or not doesn’t change anything. France has no diplomacy any more. It’s getting its orders from Brussels,” he said.

Bongo’s wafer-thin victory in the August 27 vote was confirmed on Saturday by the country’s top court, which dismissed opposition claims of vote fraud.

Ping, 73, who came second in the vote, lashed the court’s ruling as a miscarriage of justice and declared himself “president elect”.

He has so far not responded to Bongo’s overtures for a dialogue.

A career diplomat and a former top official at the African Union, Ping had filed a legal challenge after Bongo was declared the winner by a mere 6,000 votes.

Violence initially erupted on August 31 after Bongo was first declared the winner. Demonstrators set parliament ablaze and clashed with police, who made a thousand arrests.

Opposition figures say more than 50 people were killed. The government has given a toll of three dead.

Ping had asked for a recount in Haut-Ogooue province, where 95 percent of voters in the Bongo family stronghold were reported to have cast their ballots for the president on a turnout of more than 99 percent.

The European Union’s electoral observer mission said Sunday it “regretted” that Gabon’s top court “had been unable to satisfactorily rectify anomalies observed during the count”.

The African Union said it had “taken note” of the court’s verdict, as did UN Secretary General Ban Ki-moon.

France said that the court verdict clearing Bongo’s victory “has not lifted all the doubts” about the process.

Bongo’s family has exercised a long grip on power in the oil- and mineral-rich country of 1.8 million people.

Ali Bongo took over from his father Omar Bongo, who ruled Gabon for 41 years until his death in 2009.

Cameroon’s President Paul Biya, who is 83 and has held office since 1982, wrote to Bongo Monday voicing his “warm congratulations”, wishing him “success in the accomplishment of (his) new mandate”.

“In the delicate period which Gabon is going through, I want to express to you my full encouragement and hope passionately that dialogue and calm will predominate between all the parties,” Ouattara wrote in a statement.