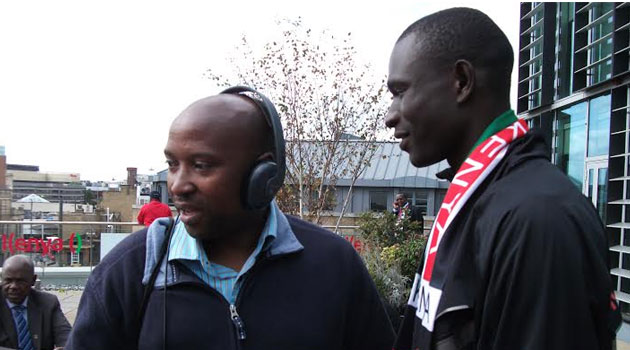 NAIROBI, Kenya, Jun 30 – Kenyans are no strangers to recognition on the world stage; be it receiving medals on a podium on crossing the finishing line, as a Nobel Laureate, as a Mexican-Kenyan as some would rather be known, as conservationists or as was recently the case with Ciiru Waithaka, in the embrace of the First Lady of the United States.

And on Friday two Kenyans will continue that long-held tradition when they receive Doctorate Degrees honoris causa from the Academy for Universal Global Peace (AUGP).

UK based Kenyan media personalities Pauline Long and Julius Mbaluto were selected unanimously for the honour by the 77 nation World Governing Council of Board of Governors of AUGP in New York, “for their services to society.”

They will be awarded their degrees on Friday afternoon at the University of Birmingham.

Mbaluto graced Kenyan television screens in the days of Voice of Kenya when he starred on the Swahili detective series Tahamaki and when VOK transitioned to KBC, on the comedy Mahoka.

Mbaluto who featured briefly on Stella, a comedy based in Wales that screened on Sky 1, transitioned from fictional storytelling to reporting on actual facts and has won several awards for his trouble.

The journalist who has provided analysis for Deutsch Welle, Press TV, OBE TV, Vox Africa and Ben TV in addition to being published by all the major newspapers in Kenya, the Daily Nation, Standard and Star, has won several awards for his documentaries.

In 2006 he won an Open Door Award and his documentary The Wrongs in Africa Today was featured on the awards night.

In 2012, he we was voted Journalist of the Year at the UK-Kenya Achievers Award in London and in 2015 his publication Informer East Africa won Best Community Newspaper at the UK BEFFTA Awards and was a top three finalist at the Social Media Awards Africa.

The BBC documentary on the other hand, “unearthed the plight of foreign students as they endured being finger printed each time they attended a lecture session to prove their attendance.”

Other than his professional pursuits, Mbaluto has been involved in charities like Sacoma where he used drama and news to increase awareness of the HIV/AIDS pandemic in London ending up with an award from the UK National Health Service and UNESCO.

Long as Mbaluto, is involved in charity work in recognition of which she has won four international lifetime achievement awards and 65 community awards with the AUGP recognition being only the latest feather in her cap.