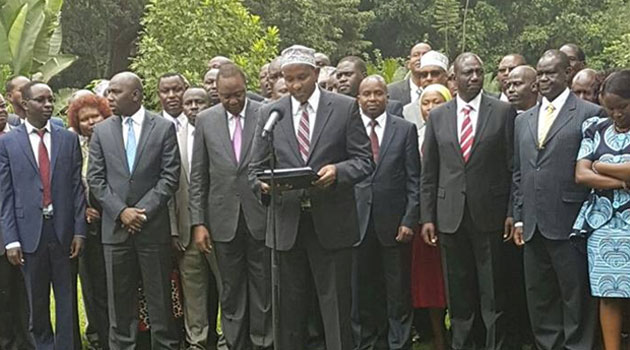 On Friday, Jubilee said it was ready to trim its 11 members nominated to the committee to seven members as suggested by CORD/PSCU

NAIROBI, Kenya, Jun 10 – With hopes that dialogue had began to take shape to resolve the Independent Electoral and Boundaries Commission standoff, both Jubilee and the Coalition for Reforms and Democracy (CORD) have agreed on a number of issues to pave way for the Joint Select Committee on IEBC.

The two parties however still have several other outstanding issues regarding the establishment and operation of the joint committee.

On Friday, Jubilee said it was ready to trim its 11 members nominated to the committee to seven members as suggested by CORD.

“We have seen from the CORD statement that there is a proposal of another four member committee that we as a party are unaware about,” a statement from State House indicated.

On Thursday, Jubilee selected 11 of its members to represent the coalition’s proposals in the committee and CORD had earlier nominated five members.

Though they had not agreed on the number of nominees each side was supposed to nominate, Jubilee dismissed CORD’s selection of yet another four-member committee following Thursday’s meeting.

CORD leader and former Prime Minister Raila Odinga announced that the party had formed a team of four legislators to work on controversial issues on IEBC within 24 hours.

“There has not been any suggestion or agreement on this four-member committee,” Jubilee responded.

The two parties were in agreement that speakers of the National Assembly and the Senate will not be involved in the discussions of the select committee.

Jubilee however specified the role they would play which would be to oversee that the committee ‘acts in accordance with the Standing Orders and the Constitution’.

“We as Jubilee Party are bound by rules and procedures of Parliament which require that the members be approved by Parliament and we undertake as Jubilee through our Parliamentary Group and whips to ensure that the names suggested by all parties are passed,” the party opined.

CORD had proposed that each of the negotiating side should have a chair while Jubilee stated it was a matter for the joint committee to decide.