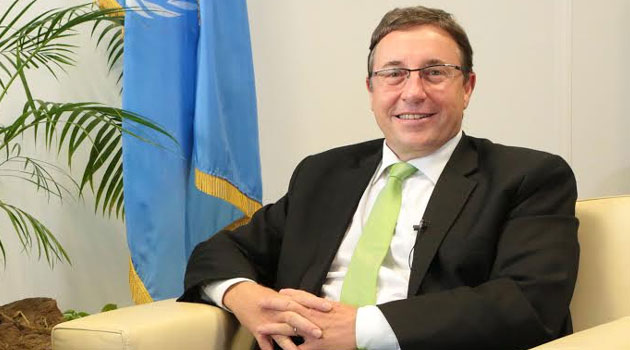 Having clocked a decade at the helm of UNEP, Achim Steiner becomes the second longest serving Executive Director behind Mostafa Tolba who wore the hat for twice that long but that’s not to minimise the years Steiner has given to UNEP; to put it into context, in those 10 years, his two sons grew from preschoolers to adolescents.

It’s no wonder then that he’s keen to leave Kenyans with a sense of what it is their hospitality has meant not just to him and his family, but the entire UNEP fraternity as a whole.

And he’s particularly keen on them gaining an understanding of the work UNEP has undertaken in the country; from pioneering investments in Kenya’s geothermal energy sources to lobbying Kenya to allow trade only in low-sulphur fuel.

Time and again he refers to Nairobi as the environmental capital of the world and seeks to speak to Kenyans, “directly.”

– The year of the environment –

Steiner describes himself as a man who’s open to opportunity as opposed to an establishment man and when opportunity came knocking in 2006 in the form of a job offer from then UNEP Secretary General Kofi Annan, he jumped at the chance.

“Until that call in 2006 from the office of Kofi Annan asking me why are you not a candidate for the Executive Director of UNEP, I would have never seen myself being a United Nations official or an international bureaucrat.”

But in his trademark green tie, he seems to have fitted into the role quite nicely. In fact on the morning of our interview, he held talks with President Uhuru Kenyatta on the UNEA-2. “Not just another conference,” he says, “but a milestone.”

On the eve of the inaugural UNEA, he described it as the monumental time of his career as UNEP boss.

“Some people may say well this was just a conference. No. It was actually the culmination of my predecessors’ efforts and my efforts and also a very close partnership with Kenya to realise an objective that had been tried many times and had taken almost four decades to achieve. UNEA is now the world’s Parliament for the environment. Every nation is represented here and there’s only one other forum in the United Nations Secretariat that has that universal membership and it’s the General Assembly.”

Did it live up to his expectations?

“Yes. But just like a young child that is borne, it will not immediately speak six languages and change the world overnight.”