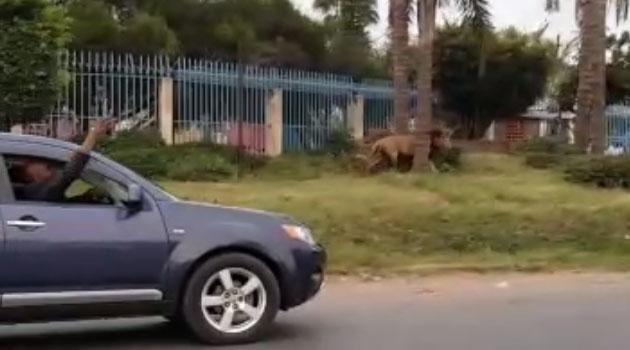 NAIROBI, Kenya, Mar 18 – Residents of Syokimau and estates near City Cabanas where a lion injured a man are appealing to the Kenya Wildlife Service to take measures to ensure wild animals stay in the National Park.

Those interviewed by Capital FM News say they fear for their lives after dozens of sheep were mauled by a lion on Thursday before the man was injured on Friday morning.

“We urge the government to ensure the park is well fenced and specifically the areas leading to residential places,” a security guard who witnessed the incident said.

“The wild animals are good for our country but can be dangerous to people if not controlled.”

With mushrooming estates in Syokimau, they say wild animals if left to stray will become a security threat.

For others, “it was the first time to see a lion.”

A man who was injured during the incident near City Cabanas has since been discharged from hospital after being treated of injuries on his arm.

KWS Spokesman Paul Udoto says the stray lion was captured and taken back to the park.

According to the residents, a similar thing happened a few days in Syokimau, where over 70 goats were killed by another pride of lions which had strayed from the park.

A video showing the lion strolling on the roadside near City Cabanas went viral on social media, with the public accusing the KWS of failing to act fast.