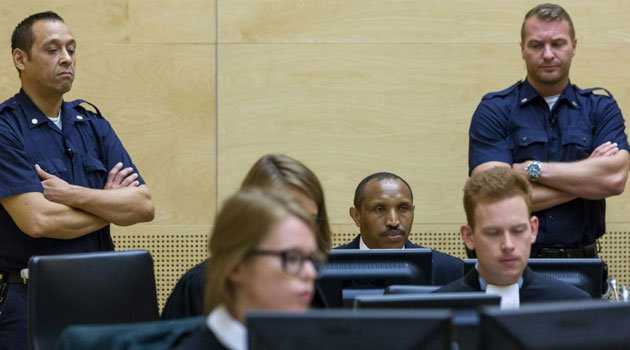 Congolese warlord Bosco Ntaganda sits in the courtroom of the International Criminal Court (ICC) in The Hague during the first day of his trial on September 2, 2015/AFP

THE HAGUE, Netherlands, Sep 2 – Congolese warlord Bosco Ntaganda gave “orders to attack and kill” hundreds of victims in a campaign of terror that decimated the eastern Democratic Republic of Congo, the International Criminal Court heard Wednesday.

Nicknamed “The Terminator,” Ntaganda denied 18 charges of war crimes and crimes against humanity as his highly-anticipated trial opened in The Hague.

Ntaganda, who surrendered to the US embassy in Kigali in 2013, stands accused of orchestrating hundreds of deaths in savage ethnic attacks in the DR Congo in 2002-03, as well as recruiting and raping child soldiers in his own rebel army.

“Bosco Ntaganda was one of the highest commanders… he gave the orders to attack and kill,” ICC chief prosecutor Fatou Bensouda told a three-judge bench.

The “bloody” northeastern Congolese region of Ituri was decimated by violence perpetrated by Ntaganda’s forces, she said, adding he left “hundreds dead and thousands living in the forest with nothing and a population terrorised”.

Bensouda opened her statement with a harrowing tale about a father discovering his family slaughtered by Ntaganda’s forces in a banana plantation in February 2003. READ: Congolese warlord ‘keen to prove innocence at war crimes trial’

“He (the man) searched through the dead bodies for a long time before discovering his dead son, a toddler, disemboweled and his throat slit,” Bensouda said.

“Rape occurred on such a large scale that the (rebels) distributed antibiotics to troops against venereal diseases,” Samson told the judges.

The 41-year-old, dressed in a black suit and white shirt with a grey-striped tie, sat and listened intently, his hands folded in front of him, as the charges were read out.

“Mr President, I plead not guilty to all the charges,” he said in a soft voice, speaking in his native Kinyarwanda.