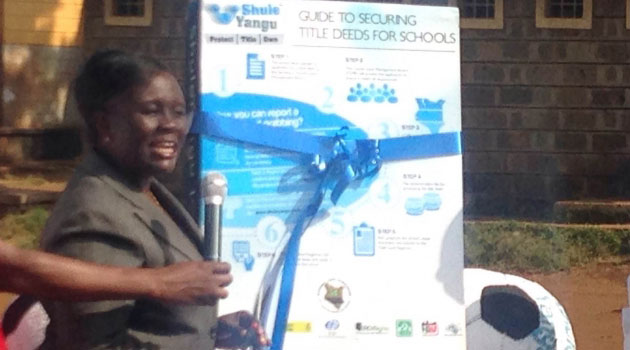 An anonymous letter delivered to her office accuses the commission “of failing to deliver justice in Mumias” and accuses her specifically of using her office to confer benefits on her tribesmen. The letter then ends in an explicit death threat.

“We had hope in the National Lands Commission for justice in Mumias,” the letter reads. “We didn’t know that you are that cheap. You are a Maragoli and doing that for your brothers to acquire land in Mumias. You have a home in Musanda and we are seriously after you. We shall kill you,” the letter reads.

Mukolwe recorded a statement with Kilimani police on receipt of the threat as the Commission’s CEO Tom Chavangi called for bolstering of the security details of the NLC’s top officials.

“Land matters in Kenya are very emotive as can be evidenced by Kenya’s long history of post-election violence and even by what’s being investigated at Kihiu Mwiri now,” he explained to Capital FM News.

The death threat follows a break-in at the commission’s Ardhi House office in January during which what were described as “sensitive documents” were stolen from Chairman Muhammad Swazuri’s office.

Swazuri said his office had been accessed through a “private door” whose key he claimed he did not possess.

Luckily, he said, the documents were “backed-up.”

Prior to the break-in, in October of 2014, an armed suspect was killed by an Administration Police officer in Swazuri’s security detail as he tried to break into the chairman’s Riara home.

One of the suspect’s partners, police said, escaped with injuries.

The AP reportedly opened fire on the suspects after witnessing them subdue the guard manning Swazuri’s gate.

The guard told police that the suspects approached the compound in a saloon car and first sought admittance by pretending to be guests.

When their ploy didn’t work, the guard said, the two above referenced suspects “jumped out of the vehicle” and were tying up the guard when the AP shot at them.

The chairman and his family were home at the time of the incident.