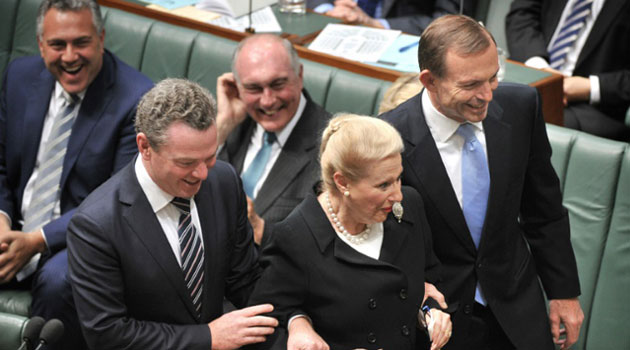 The entitlements row kicked off when it emerged that then speaker Bronwyn Bishop, centre, with Prime Minister Tony Abbott, right, had taken a helicopter, at a cost of $5,000, to fly to a Liberal Party function instead of taking a one-hour car journey/AFP

SYDNEY, Aug 10 – An Australian father outraged by taxpayer-funded travel perks for politicians and their families has turned the tables by asking members of parliament to help fund his own vacation with his children.

Australian politics has been consumed with stories about the “entitlements” elected representatives are allowed, with MPs under pressure for flying their children business class for trips which cost thousands of dollars.

The furore prompted father-of-three Stephen Callaghan to establish a Go Fund Me page, entitled “Please Pay For My Kids’ Holiday”, which is directed squarely at federal politicians.

“It has come to my attention that many of you have been using tax payer’s (sic) money to fly your children around on various holidays,” he posted.

“I would appreciate it greatly if you were able to donate to my Go Fund Me campaign so MY kids can go on a holiday too.”

Callaghan said he wasn’t asking for donations from everyday Australians, but they had nonetheless donated more than Aus$700 (US$520) to his page by Monday afternoon, with several donors saying they were prompted by their disgust at arrogant politicians.

“I plan on filing my donation to your holiday as a tax deduction,” one user who donated $10 wrote.

“I’m just so angry at all these politicians that think it’s acceptable for us to cart their kids around business class on holidays,” Callaghan told the Australian Broadcasting Corporation.

“We’re working class, we’ve got lots of friends who have never been on a holiday.”

The entitlements row kicked off when it emerged that then speaker Bronwyn Bishop had taken a helicopter, at a cost of $5,000, to fly to a Liberal Party function instead of taking a one-hour car journey.

The outrage prompted Bishop to resign as speaker and Prime Minister Tony Abbott to order a review into the official entitlements system.

Callaghan updated his page on Monday to note that no federal Member of Parliament had yet made any contribution to his long-planned family holiday to Uluru in central Australia.

Abbott had delivered “three-fifths of naff all”, Callaghan said, Bishop had given “not a sausage” and from opposition MP Tony Burke, whose children were flown business class to Uluru at taxpayers’ expense, he hadn’t “heard a peep”.

Callaghan’s Go Fund Me page can be found at: http://www.gofundme.com/2zpd8muk