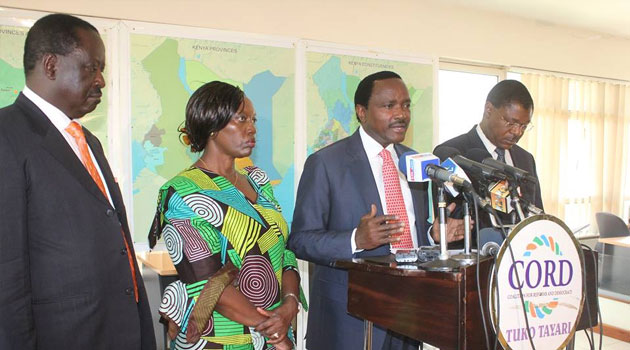 NAIROBI, Kenya, Jul 27 – Opposition leaders on Monday said they will continue to advocate for good governance following talks with US President Barack Obama.

“And this is what we are telling you as Opposition, I think Jubilee must be on the watch now. We are not going to keep quiet on corruption,” he said.

Musyoka explained that Obama was indeed concerned about corruption in the country.

Though President Obama raised his concerns over corruption in Kenya, he praised President Uhuru Kenyatta for taking steps to fight the vice.

He however, urged other leaders and the Kenyan public to abandon the vice that has left 250,000 youths jobless.

The Opposition leaders accompanied by ODM head Raila Odinga, Bungoma Senator Moses Wetangula and NARC Kenya Chair Martha Karua also said Obama did not lecture them but instead had a candid talk with them.

Karua explained that they discussed the Opposition’s memorandum which highlighted concerns of insecurity, terrorism, inclusivity and corruption.

The leaders also denied advising Obama to dictate to the government on its affairs.

Karua said their 30 minute meeting with Obama focused on fundamental issues that they had planned to discuss with him during his visit in the country.

She also said the Opposition had not contested about the legitimacy of the Jubilee government and that it was not in their memorandum to Obama.

On Sunday President Obama asked the Opposition to support the government to push Kenya forward in its development agenda.

READ: Raila, Wetangula and Karua have lectured US over ‘meddling’

He also said he told one member of the Opposition against asking the US to meddle into Kenyan affairs since when (he) was in government he asked the US to stay off Kenyan affairs.

During former President Mwai Kibaki’s government, Karua, Wetangula and Odinga had asked the West especially the US to stop meddling into Kenyan affairs.