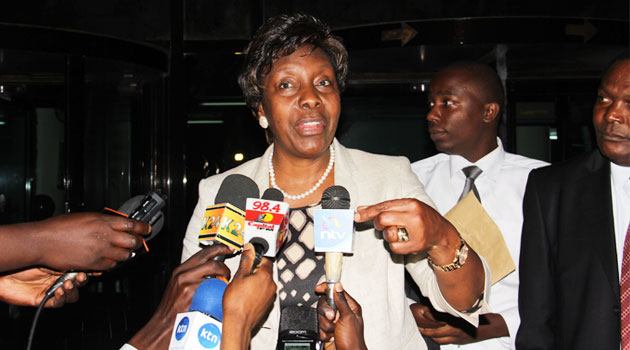 Accompanied by a battery of lawyers among them Paul Muite, she disclosed that she was due in court on Friday. Photo/ MIKE KARIUKI

NAIROBI, Kenya, June 17- “I am sure I will vindicated,” were the confident words of suspended Land Cabinet Secretary Charity Ngilu as she emerged from the Ethics and Anti Corruption Commission offices moments after Director of Public Prosecutions (DPP) ordered her prosecution.

Ngilu told journalists that she learnt from the media alerts of the order by the DPP for her prosecution on allegedly obstructing the probe into the 134-acre Karen land saga.

“I look forward to continue working and serving Kenyans,” she said.

Accompanied by a battery of lawyers among them Paul Muite, she disclosed that she was due in court on Friday.

Ngilu was visibly happy that she was not facing a graft charge over the alleged fraudulent transfer of the land valued at Sh8 billion.

“It is not a corruption charge…I decided to bring myself and make a statement and also get to know when I will go to court,” she said. “We will meet in court on Friday.”

DPP Keriako Tobiko on Wednesday said there is sufficient evidence to show that Ngilu had stood in the way of investigation into the multi-billion parcel of land.
In a statement, Tobiko said he is relying on a recommendation by the EACC which accuses Ngilu of ordering officials in her ministry to withhold documents during investigations.

The commission had said that Ngilu told the officials not to record statements with EACC investigators.

“She is alleged to have obstructed/hindered the collection of evidence regarding fraudulent transactions by directing ministry officer not to release documents to and record statements with EACC investigators,” the statement from the DPP read.

The land is at the centre of a court battle between businessman Horatius Da Gama Rose and former NSSF Managing Trustee Jos Konzolo.

Da Gama Rose, represented by lawyer Cecil Miller argues that the land belongs to him and has obtained a court order prohibiting any further transactions of the 134-acre piece of prime land.