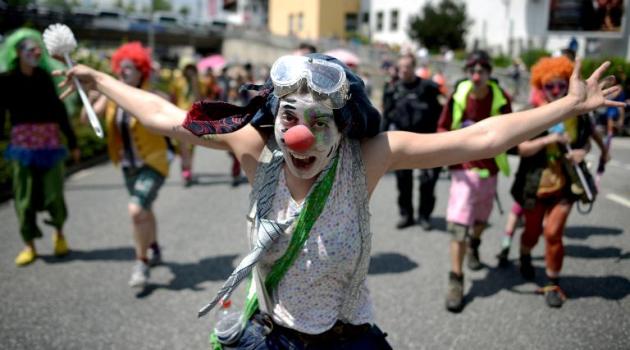 An anti-G7 protester gestures during a rally in Garmisch-Partenkirchen, southern Germany on June 6, 2015, ahead of the G7 summit/AFP

ELMAU CASTLE, June 7- Greece’s financial woes were set to dominate a G7 summit in Germany on Sunday, amid fears the debt-wracked country could crash out of the euro and rock the world economy.

The two day summit of world leaders in the picture perfect Bavarian Alps will also focus on the rumbling Ukraine crisis and threats to global security posed by jihadist extremists.

German Chancellor Angela Merkel, a champion of tough eurozone reform and austerity, is hosting the other leaders of the Group of Seven industrialised democracies — the United States, Britain, France, Italy, Canada and Japan.

Also at the power meet will be Greece’s international creditors who have wrangled for weeks to hammer out a reform plan that would unlock a final 7.2 billion euros ($8 billion) in bailout funds Athens desperately needs.

European Commission President Jean-Claude Juncker and EU President Donald Tusk were among the guests due to speak Sunday, with International Monetary Fund chief Christine Lagarde joining them on Monday.

In a sign of growing tensions ahead of a key deadline at the end of June, Greek Prime Minister Alexis Tsipras has dismissed creditors’ demands as “absurd”.

Juncker on Saturday snubbed a phone call from the radical leftist leader, with an EU official reportedly saying there was “nothing to discuss”, although Tsipras, Merkel and French President Francois Hollande later spoke by phone.

The three leaders “took stock of the situation to help move forward the negotiations between Greece and the three (creditor) institutions,” a French source said.

Athens last week withheld a 300-million-euro loan repayment to the IMF, opting instead to group four scheduled tranches into a single payment at the end of the month.

Tsipras on Friday argued that a “cynical” policy of economic asphyxiation and harsh austerity being applied to Greece would ultimately impact other European states in economic difficulty.

US President Barack Obama touched down early Sunday morning in southern Germany swiftly followed by a procession of other leaders.

The guests were treated to a Bavarian-style welcome with children in traditional dress handing them flowers.

Obama will kick off events on Sunday with Merkel by enjoying local beer, pretzels and oompah music at a nearby village.

His administration has urged Europe to resolve the festering Greece issue.

Washington has also voiced strong concern about what is set to be the other big G7 topic, the latest flare-up in fighting in Ukraine, which last week claimed scores of lives and threatened to derail a fragile ceasefire.

Abe and Harper made a point of stopping off in Kiev on their way to Germany to voice support for the embattled government of President Petro Poroshenko, which has been fighting a separatist insurgency by pro-Moscow rebels.

Putin insisted on the eve of the summit that Russia is not a threat to the West.

“There’s no need to be afraid of Russia,” Putin told Italian newspaper Corriere della Sera, adding that “only a sick person — and even then only in his sleep — can imagine that Russia would suddenly attack NATO”.

Merkel had hoped to use the picture-book setting of lush Bavarian meadows and magnificent mountain peaks to showcase the homely side of Europe’s biggest economy while searching for consensus on a catalogue of pressing global issues.

Instead, the event threatens to be overshadowed by two leaders who are absent, said the Munich daily Sueddeutsche Zeitung.

“While the government stoically insists everything is normal, two virtual guests are charging up the atmosphere in a way that threatens to dominate the summit: Russian President Vladimir Putin and -– some distance behind him — Greek Prime Minister Alexis Tsipras,” it said.

On the official agenda as leaders huddle in the luxury Elmau Castle resort are issues from climate change and Ebola to women’s rights, and the fight against Islamist militancy.

Also hoping to grab attention will be protesters who have vowed to march toward the venue, which is protected by a ring of steel with more than 22,000 police.

Police reported isolated incidents and in one case deployed pepper spray to disperse some protesters but the noisy demonstration in the city of Garmisch-Partenkirchen was mainly good-natured with music pumping out in sweltering temperatures.

Early Sunday morning, a handful of protesters staged a sit-in demonstration to block the main access road to the castle, meaning journalists were transported by helicopter to the location.

The protesters told AFP they had managed to sneak through the woods unnoticed by police in the early hours of Sunday to get into position.