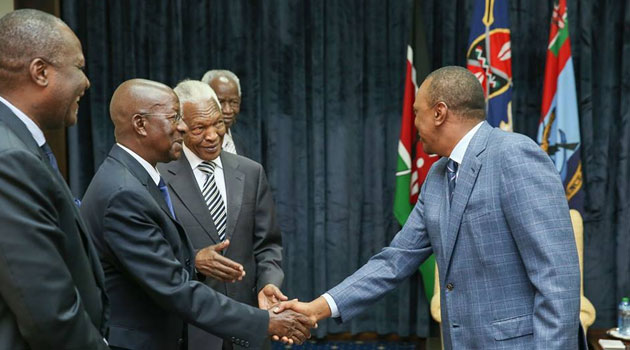 The Committee of Elders, which has been meeting different groups in Burundi since beginning of the year, had come to brief the President on the political situation in the neighbouring country.

NAIROBI, Kenya, May 9 – President Uhuru Kenyatta has urged the parties to the current dispute in Burundi to open up for dialogue as the only way to end the political impasse in the country.

President Kenyatta said mutual agreements by all parties to the dispute will ensure the electoral process brings peace to Burundi.

The President spoke when COMESA Committee of Elders chaired by Bethuel Kiplagat and EAC Eminent Persons paid him a courtesy call at State House, Nairobi.

He said the continued civil unrest in Burundi’s capital, Bujumbura, was not only a threat to the country’s stability but the whole of the East African region.

“The consequences of the unrests in Burundi will be felt beyond the country’s borders especially neighbouring countries,” the President said.

The Committee of Elders, which has been meeting different groups in Burundi since beginning of the year, had come to brief the President on the political situation in the neighbouring country.

The Elders and Eminent persons, including the former acting Governor, Central bank of Malawi Bishop Mary Nkosi, former Prime Minister of Tanzania and Vice President Justice Joseph Warioba and former Zambian Trade minister Felix Mutati, had been invited by Burundi in January this year to walk the country through the electoral process.

President Kenyatta supported a proposal for a regional Summit on Burundi and encouraged the committee to continue with the peace initiatives to defuse the growing political crisis that may plunge the country into further bloodshed.

President Kenyatta later at State House, Nairobi, bade farewell to the outgoing Korean Ambassador to Kenya Choi Donggyou whose tour of duty in the country has ended.