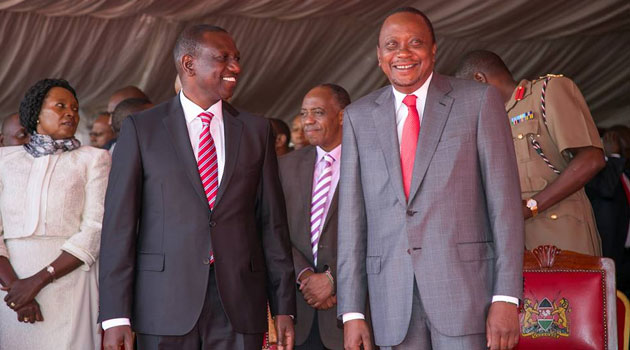 NYERI,Kenya, May 24 — President Uhuru Kenyatta today told Governors to put the interest of Kenyans above everything else.

He said county bosses should utilize funds they get from the National Government prudently to benefit Kenyans instead of engaging in a chorus for more funding before they have even shown how they have used what was allocated to them.

The President said other groups asking for changes to the Constitution were misleading Kenyans for their own selfish interests.

“What we don’t want is noise, calls for more funds and referendum to change the Constitution are misplaced, those making a lot of noise are the same people who said the constitution will not be changed even a coma,” President Kenyatta pointed out.

He advised Governors to work more closely with the Government to ensure Kenyans get better services and benefit from the devolved system of government.

President Kenyatta said his Government is focused on delivering its pledges to Kenyans and will at no time be derailed from its agenda.

He said it was unfortunate that opposition leaders spend most of their time polictiking without offering tangible solutions to the problems affecting wananchi.

The President was speaking in Nyeri town when he addressed wananchi after unveiling a plaque in commemoration of Sister Irene Stefani.

He said much progress can be achieved in the country if Kenyans emulate Sister Stefani’s spirit of giving service with commitment.

The President said many of the Jubilee government initiated projects are on course and that 18000 schools have been connected to the national grid while the remaining 2000 will soon be connected.

He said the project to connect electricity to all schools will help make it possible for the Jubilee Government’s lap top project.

“Those who thought that this laptop project has failed are in for a rude shock,” said the President.

President Kenyatta said major projects being implemented by the Jubilee Government including the Standard Gauge Railway, the Annuity Roads Programme of tarmacking 10,000 kilometers of road and the Sh38 billion project to equip two selected hospitals in every county to the standards of a referral hospital will change Kenya.

Deputy President William Ruto said the Government will fulfill all the pledges it made to the electorate and that it has no time for empty rhetoric.

“We cannot engage in politics from morning to evening, Monday to Sunday, we agreed to work together under one leader President Uhuru Kenyatta,” he said.

The Deputy President said politicians who are making noise are used to dividing Kenyans along ethnic and religious lines, a tactic that the Jubilee Government abhors.

He said in its aim to unite all Kenyans, Jubilee coalition has decided to form a new political party, Jubilee Alliance Party (JAP).

“ Our aim is to unite Kenyans, politics of divisive tactics have no place in the current Kenya, we want to work together to change this country for better,” said the Deputy President.

Other leaders who spoke included Governor Nderitu Gachagua, Senator Mutahi Kagwe and local MPs who pledged to support the President in his quest to unite Kenyans and develop the country.