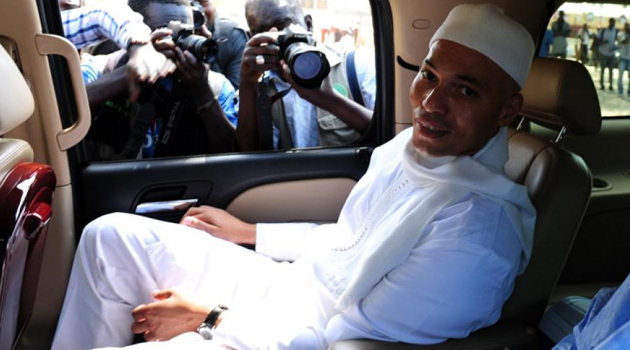 Senegal, Mar 23 – Anticipation was high in Senegal Monday where a court was to issue its verdict in the graft case of flamboyant former minister Karim Wade, son of ex-president Abdoulaye Wade.

Karim Wade went on trial in June 2014 charged with illegally acquiring companies and real estate worth almost $240 million (180 million euros) while serving in various government posts during his father’s 2000-2012 presidency.

He has been in custody since April 2013, while justice officials investigated claims he abused his position to accumulate vast riches.

Prosecutors are seeking a seven-year prison term and a fine of 380 million euros in the case.

Wade, 46, denies the charges, and his supporters — led by his father — claim the trial is politically motivated.

In reaching its decision, the court will have to sift through issues of business ambition, political influence, and a father’s unwavering advocacy.

After pursuing a successful career in finance in the City of London, Karim Wade returned to Senegal two years after his father’s 2000 presidential victory, and was soon tapped for a series of increasingly important public positions.

Those included simultaneous appointments to several key portfolios, earning him the nickname “minister of heaven and Earth.”

He was also chosen to head the National Agency for the Organisation of the Islamic Conference (ANOCI), which successfully oversaw the transformation of Dakar in time to host the 11th Islamic Summit of 57 Muslim countries in 2008 — but was also criticised for a lack of financial transparency.

Backed by his father, Wade was also selected to oversee the construction of a new international airport in Dakar, the restructuring of Senegal’s chemical industry and the creation of a special economic zone.

But the younger Wade also inspired mistrust and derision among voters in Senegal, who resent his long stays in Europe for school and business, and mock his affection for traditional Senegalese clothes despite having never mastered the country’s Wolof language.

Voters made their disdain clear in 2009, when Wade campaigned to become the mayor of Dakar — a bid interpreted as setting the table for higher national political ambitions, but which resulted in his electoral drubbing.

Despite the trouncing, the elder Wade sought to pass a bill creating the post of vice-president, which many observers viewed as designed to facilitate his son’s eventual ascension to the presidency.

Karim Wade’s divisive influence continued to grow up to Senegal’s 2012 presidential election, which his father lost to challenger Macky Sall — whom Wade supporters accuse of having orchestrated the current corruption proceedings.

Indeed, even as Monday’s verdict loomed, the Wade camp were preparing their political counter-offensive against Sall.

On Saturday the opposition Democratic Party of Senegal (PDS) choose Karim Wade as its candidate for the country’s next presidential election, whose date has yet to be set.

The PDS also called on supporters to converge on the court Monday ahead of the corruption verdict in a show of support — and force — for Wade.