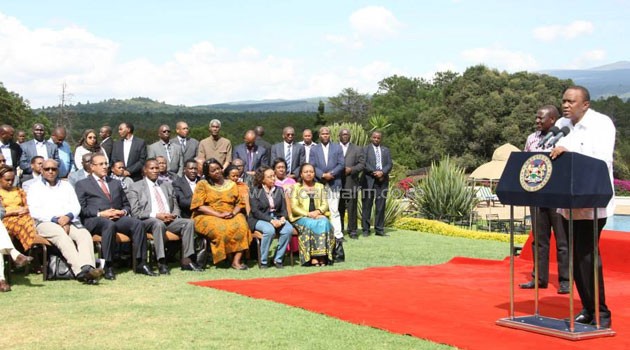 The resolution was arrived at during Thursday’s Cabinet meeting at State House Nairobi, where President Uhuru Kenyatta directed the Cabinet Secretaries to be represented abroad by Ambassadors or send County Commissioners/FILE

NAIROBI, Kenya, July 11 – Cabinet Secretaries have been directed to restrict foreign travels as part of measures to cut down unnecessary expenditures.

The resolution was arrived at during Thursday’s Cabinet meeting at State House Nairobi, where President Uhuru Kenyatta directed the Cabinet Secretaries to be represented abroad by Ambassadors or send County Commissioners.

A Cabinet brief sent to newsrooms did not state reasons for the foreign trips restriction but it is widely seen as part of the measures the government is initiating to cut the wage bill.

“Cabinet also limited foreign travels to only the most critical ones. Ambassadors and County Commissioners to henceforth represent Cabinet Secretaries as appropriate,” a statement by the secretary to the Cabinet Francis Kimemia pointed out.

It is the first time Cabinet Secretaries are being told to send County Commissioners to represent them abroad.

President Kenyatta also directed Government Departments down to the Counties to buy Kenyan products and services and should only resort to buying foreign goods and services if they are not available or cannot be produced in Kenya.

He stated that Ministries should challenge local firms’ entrepreneurs to improve competitiveness and the standard of their products instead of dismissing them at the first instant.

The Cabinet meeting approved the establishment of a legal framework for Warehousing Receipt System Bill in Kenya.

“This radical Bill seeks to entrench and legalize structural agricultural commodity trading system in the cereals and grain sub-sectors. The Bill will also create certainty, predictability, and security in the agricultural market,” the statement said.

The President also approved the performance Contracting Evaluation Results 2012/13 and directed that Managements that had consistently and persistently recorded gross poor performance be purged and replaced with more competent and productive performers.

“Cabinet noted that 40 percent of parastatals had continued to notoriously perform dismally. In the corollary, best performers would be rewarded and motivated.”

The meeting also discussed the implementation of Public Service vehicle regulations and Digital speed limiters that seek to achieve long term solutions and regulations road to road safety following heavy loss of lives and maiming of Kenyans in the past.

The Cabinet also directed that sustainable solutions be also urgently developed to streamline the Boda-Boda Industry to enhance road and passenger safety.