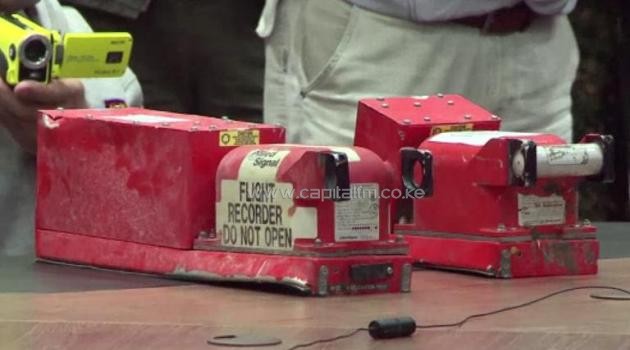 AFP TV video grab shows the two black boxes recovered from the crash site of the MH17 jet being handed over to Malaysian officials during a press conference in Donetsk on July 22, 2014/AFP

Dutch investigators leading a probe into the disaster were preparing to take charge of the bodies of 280 victims set to arrive by train in the government controlled city of Kharkiv.

The remains are to be taken to the Netherlands which had 193 citizens on board when the flight went down on Thursday, a disaster that has taken Ukraine’s bloody three-month conflict to the doorstep of countries as far away as Malaysia and Australia.

Pro Russian separatists — who stand accused of downing the aircraft, possibly with a missile supplied by Moscow — conceded to a furious international clamour for the bodies and black boxes to be released to investigators.

The rebel concessions came as European foreign ministers were to meet in Brussels to weigh possible new sanctions against Russia for its perceived support of the insurgency rocking ex-Soviet Ukraine.

Both black boxes, which record cockpit activity and flight data, were handed to Malaysian officials by the prime minister of the self proclaimed Donetsk People’s Republic, Alexander Borodai, in front of scores of journalists.

Borodai also announced a ceasefire within 10 kilometres of the site, hours after the pro-Western authorities in Kiev said they would halt all fighting in the zone.

His rebel forces had Monday had allowed Dutch forensic experts to examine the bodies, kept in refrigerated train cars away from the sweltering summer heat.

International monitors were also finally given freedom to examine the vast crash site, littered with poignant fragments from hundreds of destroyed lives.

Despite the apparent progress in getting the investigation going, leaders warned the rebels’ handling of the crash site had already done much damage.

Australian Prime Minister Tony Abbott, whose country lost 28 citizens and nine residents in the crash, said: “There is still a long, long way to go.”

“After the crime comes the cover up,” he added. “What we have seen is evidence tampering on an industrial scale. That has to stop.”

Experts from Malaysia Airlines, reeling from its second disaster in only four months after flight MH370 went missing in the Indian Ocean, said the black boxes were “intact with only minor damage.”

“We have not found the black boxes from flight MH370, so (we) are happy to be able to recover these,” said a member of the team.

The struggling airline meanwhile had to defend itself late Monday after confirming it had diverted a flight from Ukrainian to Syrian airspace.

“The Syrian airspace was not subject to restrictions,” the flag carrier said in a statement.

In Brussels, European foreign ministers were meeting to discuss possible new sanctions against Russia, which has been accused by the United States of supplying the missile allegedly used to shoot down the plane.

Obama put the onus on Moscow to lift the suspicions weighing upon it, saying President Vladimir Putin must prove “that he supports a full and fair investigation”.

An under fire Moscow hit back, saying records showed a Ukrainian military plane was flying three to five kilometres from the Boeing 777 before it crashed.

“With what aim was a military plane flying along a civilian aviation route practically at the same time and at the same flight level as a passenger liner?” asked Lieutenant-General Andrei Kartopolov.

Ukraine’s President Petro Poroshenko dismissed the suggestion the army was to blame, calling it an “irresponsible and false statement” by Russia.

Russia’s riposte came after Kiev released fresh recordings of what it said were intercepted conversations between rebels conspiring to hide the flight’s black boxes from international monitors.

The US embassy confirmed as authentic earlier recordings by Kiev of an intercepted call between an insurgent commander and a Russian intelligence officer as they realised they had shot down a passenger jet.

The Washington Post said Ukraine’s counterintelligence chief had photographs and other evidence that three Buk M-1 anti aircraft missile systems moved from rebel-held territory into Russia less than 12 hours after the crash.

The separatists’ violent bid to join Russia is the latest chapter in a prolonged crisis sparked by Kiev’s desire for closer ties with the EU, a goal many in the Russian speaking east do not share.