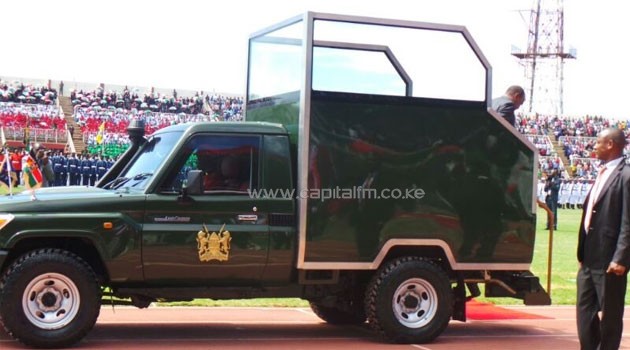 The armored Toyota was at odds with President Kenyatta’s previous public appearances where he has been reported to break ranks with his security detail to shake hands with the masses and carry children. Photo/JOSEPH MURAYA

NAIROBI, Kenya, June 1 – President Uhuru Kenyatta deviated from tradition on Sunday by making his way into the Nyayo National Stadium for the Madaraka Day celebrations not on the customary ceremonial Land Rover but a Toyota Land Cruiser with bullet proof glass surrounding it.

The motivation for the change was unclear with Kenyans on Twitter (KOT) speculating that it could be part of heightened security measures or another manifestation of the ‘look East’ policy adopted by President Kenyatta’s government.

“Our president is now in a bullet proof LAND CRUISER? Where is our ceremonial Landie?,” @MediaMK posed.

While @Kenajode saw it as a definite move East, “Moving East kabisa even chase cars including one that dropped him Toyota Landcruiser VX and Prados no European cars!!”

Former Activist and photojournalist Boniface Mwangi was however of a different opinion and saw the bullet proofed Toyota as a consequence of increased insecurity in the country.

“The crowd at the stadium is screened but Uhuru’s vehicle is proof that Kenya is no longer as safe as it used to be,” he tweeted.

The armored Toyota was at odds with President Kenyatta’s previous public appearances where he has been reported to break ranks with his security detail to shake hands with the masses and carry children.

President Kenyatta’s lap on the vehicle also came just hours after the Coalition for Reforms and Democracy (CORD) decried the deteriorating state of security in the country.

“In the three months that I have been away, Kenyans daily communicated their frustrations to me via email, SMS and phone calls. A baby was shot in Mombasa and his mother killed, part of the growing victims of insecurity that has claimed young and old, babies and mothers,” Former Prime Minister Raila Odinga stated on his return from a three month trip abroad.

While acknowledging that security was indeed a challenge in his Madaraka Day speech, President Kenyatta was also adamant that his government is well able to manage it.

“These extremists will attack even a child, like Satrin Osinya. Nothing can justify such heinous acts, and nothing will stop us from bringing their perpetrators to justice,” he assured.