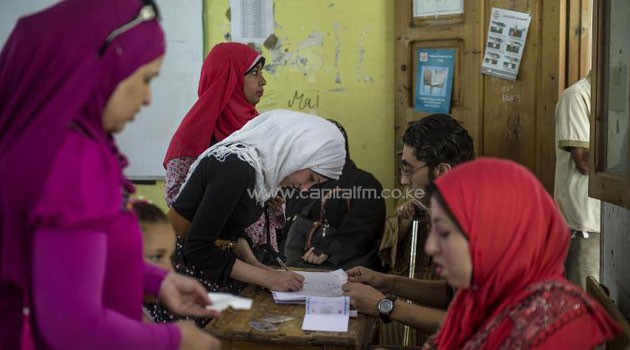 After reports of a meagre numbers at the polling stations on Monday, Sisi’s backers and sympathetic media harangued people to go and vote as Islamists had urged a boycott/AFP

CAIRO, May 28 – Egypt’s presidential election extended into a third day Wednesday, reportedly due to low turnout in the first election since Islamist Mohamed Morsi was overthrown last year

Abdel Fattah al-Sisi, the retired field marshall who toppled Morsi, is expected to easily win, but his campaign had hoped for a large turnout as a decisive show of support.

After reports of a meagre numbers at the polling stations on Monday, Sisi’s backers and sympathetic media harangued people to go and vote as Islamists had urged a boycott.

Electoral commission chief Abdel Aziz Salman put the turnout by the end of the second day at about 37 percent of the 53 million electorate, the official MENA news agency reported.

That is well below the almost 52 percent who voted in the 2012 election won by Morsi.

As polling closed on Tuesday, Sisi’s sole rival, the leftist Hamdeen Sabbahi, slammed the ballot extension, saying it raised “questions… about the integrity of the process”.

The extension into Wednesday was made to “give a chance to the largest possible number of voters to cast their ballots,” said an electoral official.

The organisers of the vote said they extended the election because of a “heatwave that resulted in a crowding of voters during the evening hours”.

“We had hoped the commission would extend voting each day after 9pm because it is very hot,” Sisi’s spokeswoman Mona el-Kouedi told AFP.

“But we think an extra day would make voters exert more, and also the judges (overseeing the vote) would tire.”

Morsi’s Muslim Brotherhood, subjected to a police crackdown that has killed hundreds of its supporters, called for boycott and said it would not recognise the outcome.

So too have key activists behind the 2011 uprising that ousted long-time strongman Hosni Mubarak in 2011. They fear Sisi is an autocrat in the making.

But some Cairo polling stations were deserted on Tuesday morning.

“I don’t want to be part of those responsible for all those people who died,” Tarek Salim told AFP at a Cairo cafe.

Another abstainer, Diaa Hussein, complained there was no real choice, saying: “Sisi didn’t leave a chance for anyone else to win”.

Gamal Abdel Gawad, an analyst at the American University of Cairo, said the extension was unnecessary.

“When the result of an election is already known, there is very little incentive for voters to come out and vote.”