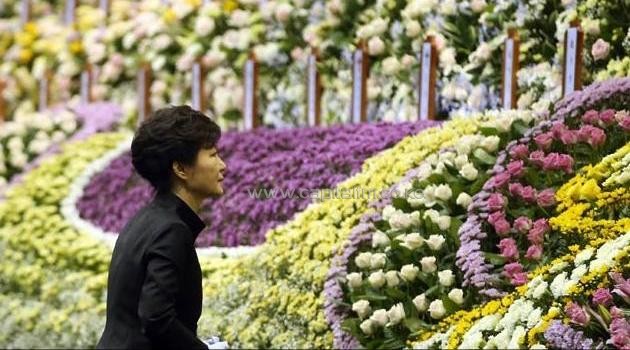 SEOUL, May 21 – Scores of South Korean investigators on Wednesday raided a sprawling religious compound in a widening probe into last month’s ferry disaster in which hundreds died.

TV footage showed a convoy of six government vehicles including four vans and a mini bus enter Geumsuwon, a church and farming complex in Anseong, about 80 kilometres (50 miles) south of Seoul.

Yoo, 73, has no direct stake in Chonghaejin, but his children and close aides control it through a complex web of holding companies.

Prosecutors suspect Yoo is responsible for unsafe business practices believed to have contributed to the Sewol ferry’s sinking, including overloading the ship and remodelling it to squeeze in more passengers and cargo.

Hundreds of followers of the Evangelical Baptist Church of Korea, a splinter church group founded by one of Yoo’s relatives, have been holed up for two weeks in Geumsuwon in Anseong south of Seoul.

Newspapers have reported that Yoo may also be hiding there.

The church’s followers blockaded in the compound have warned that any police effort to force entry would be regarded as “religious persecution” and lead to a “dangerous” situation.

There have been concerns that efforts to enforce a warrant could trigger a volatile showdown with the church’s followers.

The church says Yoo has no connection with it, but former followers who left the institution describe him as its leader, worshipped as a demi-god.

The raid came after the church yielded to pressure from authorities and let the investigators in.

But journalists and photographers were not allowed in as the church followers immediately regrouped to form human walls at the gate.

Prosecutors have said that charges against Yoo will include embezzlement and tax evasion but will not give a full list of alleged offences until Yoo is officially arrested.

Yoo, who has described himself as an artist and photographer, has a colourful and checkered past. He was once convicted of fraud when a company under his control went bankrupt.

The Evangelical Baptist Church of Korea has an estimated 20,000 followers and, under a different name, made headlines in 1987 following the mass suicide of 32 members.

Yoo was investigated but cleared of any involvement in that incident.

Prosecutors investigating the ferry disaster have already raided Yoo’s home, and his eldest son, Yoo Dae Gyun, is also being sought after ignoring an official summons.

As of Wednesday, 288 people have been confirmed dead, with 16 still unaccounted for.

The Sewol’s captain and three crew members were charged last week with manslaughter through gross negligence.

Five Chonghaejin officials have already been arrested for possible criminal negligence, and the investigation has widened to the Yoo family and possible fraud and tax evasion charges.