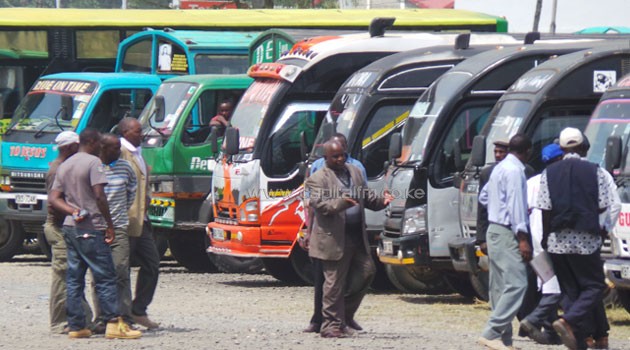 Commuters in most areas walked to various destinations, as others sought alternative transport/FILE

NAIROBI, Kenya, Apr 1 – Commuters in most parts of the country were stranded on Tuesday after most Public Service Vehicle (PSV) operators grounded their vehicles over non-compliance with new tough road safety regulations.

Commuters in most areas walked to various destinations, as others sought alternative transport.

“I woke up quite early and have stayed at the stage for quite a long time. There are few matatus on this route and we are paying as high as Sh100 this early,” said Mugo Muragiri, a commuter on the Rongai route in Nairobi.

Most PSVs at the Kisumu bus terminus were also grounded following failure to comply with the new traffic rules.

Most passengers remained stranded as the few vehicles that had complied charged exorbitant fares.

John Olum, a driver plying the Kisumu Homa Bay route said that there was shortage of the speed governors in the market.

Olum further complained that the prices have also been increased from Sh35,000 to Sh40,000.

The situation was the same in Mombasa, Nakuru and other major towns. READ Crisis looms as court declines to halt PSV rules

The National Transport and Safety Authority (NTSA) Director of Motor Vehicle Inspection Gerald Wangai told Capital FM News that as of Monday night, only 8,300 vehicles out of the more than 60,000 had complied with the safety regulations.

“Out of the total number of vehicles countrywide, the number of those who have complied is very few. This is as a result of the owners going to the inspection centres at the last minute,” he said.

Matatu Welfare Association (MWA) Chairman Dickson Mbugua urged operators who had not complied with the regulations to keep off the roads until they do so.