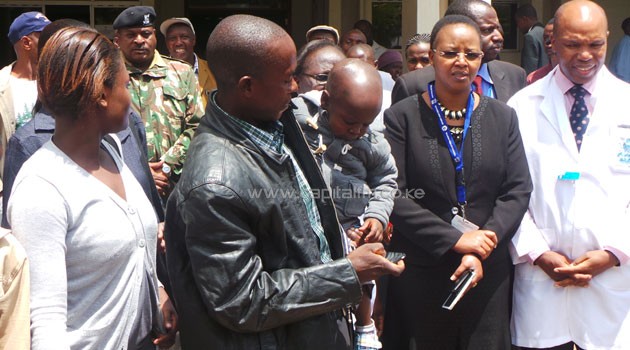 Speaking when handing him over to his father, KNH Chief Executive Officer Lily Koros described the operation as successful and stated that Satrine was in a jovial mood after receiving treatment/MUTHONI NJUKI

NAIROBI, Kenya, Apr 10 – Satrine Osinya, the toddler who had a bullet removed from his head after being shot in the March 23 Likoni church attack has finally left hospital.

Osinya who lost his mother in the attack underwent surgery at the Kenyatta National Hospital (KNH) under the care of 10 specialists.

Speaking when handing him over to his father, KNH Chief Executive Officer Lily Koros described the operation as successful and stated that Satrine was in a jovial mood after receiving treatment.

“Today we want to say that we wish baby Satrine very well in his life and we believe that he is going to live to be a neurosurgeon and we want to wish the family very well. Of course we are sorry that he is going back to a home without a mum and we should and will continue praying for him and his family and giving him support.”

She further underscored the need for the family to be given support during his recuperation and even after he has recovered.

“I would like to also thank the government for the attention they gave to this baby and also the others who were hurt. I want to thank more sincerely the medical team who handled Satrine from the day he joined us up to this particular moment,” she stated. “Of course as the KNH family, we are going to miss him. He had become part of us and even though we have discharged him, we are going to do a follow-up to ensure he gets all the care and attention that he requires.”

Julius Kiboi one of the neurosurgeons who operated on him stated that Satrine was given a clean bill of health after the surgery was successful.

“We appreciate that baby Satrine has done very well now, he is ready to go home. We have given him some medication and a clean bill of health. And we will conduct subsequent follow-ups to see how he is going to develop,” he said.

His father Benson Osinya expressed gratitude for the help he received during Satrine’s stay in hospital and stated that he would not have succeeded without the support he received.

“My child has recovered fully and he is happy. He is walking around as you can see. I am very happy with the way the operation went but there is a gap in my life because my wife is not here. I would just like to ask God to help me look after my children well,” he stated.

“I would still like to ask for financial assistance even when attending the follow-up clinics as we are not supposed to miss even a single one of them. At this time, I am still here in Nairobi for about two to three days before going back to Mombasa,” he pointed out.

He indicated that the next step in his life would be to try and get a job in a conducive environment where he will raise his family well.

“My next step is to ask the government to assist me to get a job and if possible even here in Nairobi because I am afraid to stay in Mombasa because of what has been happening. My children are even traumatised with what happened there. If a get a job anywhere, I am ready to move there.”

The bullet had been lodged in the right side of the boy’s brain, which gave some hope because most of the cognitive functions are controlled by the left side of the brain.