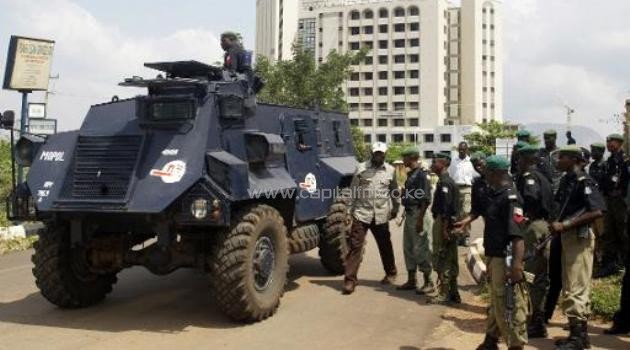 Nigerian police stand beside an armour personnel carrier in Abuja, on November 8, 2004 /AFP

ABUJA, March 15- At least seven people were killed and dozens were injured in Nigeria’s capital Abuja on Saturday after thousands of panicked job-seekers stampeded during a government recruitment drive at the national stadium.

Survivors told AFP that thousands had gathered to apply for jobs with the immigration department in the Abuja stadium.

One witness said the stampede broke out as applicants surged towards a central stage. They said only one entrance to the 60,000 capacity stadium was open. It was unclear how many people were inside at the time of the crush.

Victims were taken to a public hospital, though many could not be admitted due to lack of capacity, according to hospital spokesman Tayo Haastrup.

No official casualty list was given, but an AFP journalist at the scene counted seven dead and dozens injured.

“I cannot even imagine the number of people that stamped on me,” said survivor Rosemary Ogida. “I just remember being picked up by three men.”

The young woman, who had regained consciousness at the hospital but could barely move her left leg, told AFP she was desperate after having lost the original of her university diploma in the stampede.

Those with stable injuries “will be sent to other hospitals so that we can deal with the numerous injured that continue to arrive,” Haastrup said.

“Unfortunately, the hospital management was not given any early warning about the scale of the situation at the stadium,” he added.

The recruitment drive was being held at several stadiums around the country on Saturday.

The sheer size of the crowds was a testament to the vast numbers of unemployed in Nigeria, most of whose 170 million citizens live on less than two dollars a day, while the country lags behind in key development indicators such as health.

Unemployment is a particular challenge, with an estimated 37.5 percent of under-25s out of work, according to the National Bureau of Statistics.

Already Africa’s top oil producer, Nigeria is predicted to soon replace South Africa as the continent’s biggest economy, but recognition is growing that the landmark will be largely symbolic and do little to address major problems.

On paper, the future looks bright for Nigeria: the International Monetary Fund has forecast 7.4 percent growth in gross domestic product (GDP) in 2014, up from an estimated 6.2 percent last year.

But the healthy growth figures reflect the country’s unhealthy dependence on the oil sector, which provides minimal employment in Africa’s most populous nation.

“We are growing but not creating enough jobs. That is a very big challenge,” Finance Minister Ngozi Okonjo-Iweala told business leaders in December.

“The rate of growth that we have is good but could be better. We need to grow faster. It is clear that the top five to 10 percent is capturing most of whatever growth there is and people at the bottom are being left behind.”