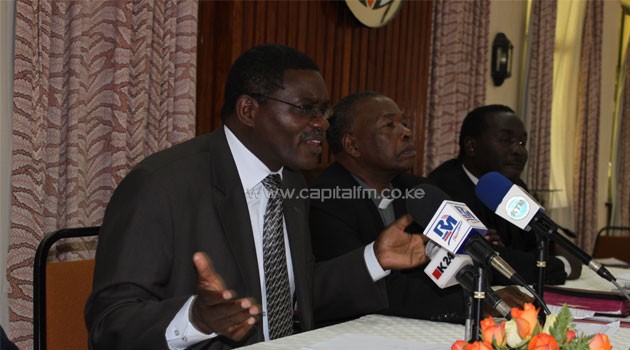 NAIROBI, Kenya, Mar 11 – The National Council of Churches of Kenya (NCCK) has called on the government to initiate other measures of checking the country’s wage bill, in addition to the proposed pay cuts.

While expressing his support for President Uhuru Kenyatta’s initiative, NCCK General Secretary Reverend Canon Peter Karanja said there were several other measures than can be used to cut on expenditure.

He proposed that Parliament audits the cost of implementing the new Constitution so as to determine what measures can be taken to cut government wastage.

“I know the comments that have been made by Kenyans from different sectors, saying this is too little, too late but you know the Chinese saying that a journey of thousand miles begins with one step,” he said.

“We commend the president for that one step and challenge him and his Cabinet to come up with additional measures of checking the wage bill; that one that has come, we appreciate and we are looking for more.”

He said an audit by Parliament could determine what areas the country can review in implementing the Constitution.

“One of the disappointments was that in drafting the new constitution, the Committee of Experts did not seem to address what was going to be the cost of rolling out devolution – the constitution commissions and the basic rights enshrined in the Constitution as a right of every Kenyan,” he pointed out.

“There are no rights without any cost; someone has to pay for them.”

He said if an amendment of the Constitution will help address the current crisis, the process should be initiated.

Education Cabinet Secretary Jacob Kaimenyi who spoke at the same forum called on churches to embrace the initiative.

“We all need to stand and be counted in this country, it is not the case of Cabinet Secretary Jacob Kaimenyi having a pay cut of 10 percent, where are you?” he posed.

“Do you love your brother or your sister? Ideally in the world, the difference between the lowest and the highest paid must not be more than 25 percent but some of you are looking at me and are enjoying 40 percent,” he stated.

He even challenged the church to practice what they preach in a bid to ensure the entire society is developed.

“When you employ your house maids, what do you do? You give them Sh1,500 and in the company where you are employed you are getting Sh500,000… terrible!” he challenged them.