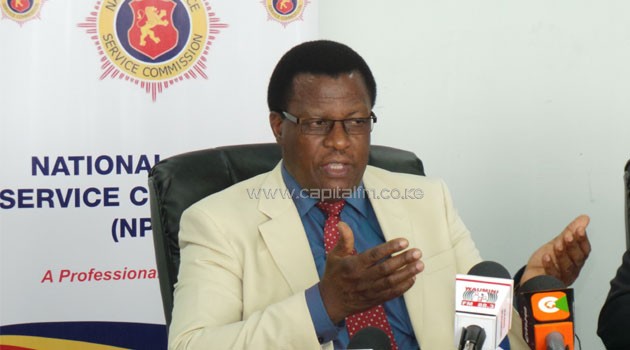 NAIROBI, Kenya, Mar 30 – The National Police Service Commission has now confirmed that the Court ruling given by Justice George Odunga on Thursday has not nullified the posting of County Police Commanders as interpreted in a section of the media.

The National Police Service Commission Chairman Johnstone Kavuludi says the county commanders will continue serving in their respective posting on an interim basis until further direction from the Commission.


“As submitted in the court, the process of appointing substantive officers to the counties is ongoing and is being considered in tandem with the ongoing vetting process,” he said.

Kavuludi denied claims that there is a misunderstanding within the commission pointing out that the inspector General and the two deputy inspectors General are members of the commission.

He assured that there is no lapse in securing the counties and pointed out they will not appeal for the decision as earlier stated by the Inspector General David Kimaiyo.

The International Centre for Policy and Conflict moved to court June last year, to quash the decision of Kimaiyo in appointing and deploying 47 county police commanders claiming that the appointments are illegal.

On Friday Inspector General of Police David Kimaiyo had said he will file an appeal against a ruling issued on Thursday that declared he has no powers to appoint or transfer County Police Commanders.

Kimaiyo said he will ask the Attorney General to study the court order and institute an appeal to overturn the decision.

“There is leeway for the National Police Service through the office of the Attorney General to move to the next step and as per the law, the next step is to make an appeal and that is what we are doing at the moment,” Kimaiyo said.

He however made it clear that the service was committed to obeying court orders.