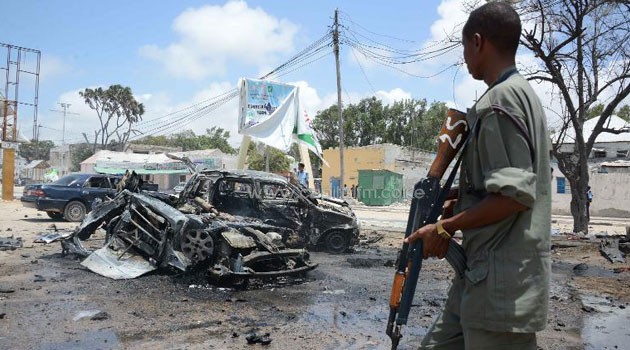 Scene of a previous blast in Mogadishu/AFP-File

MOGADISHU, Feb 21 – The presidential palace in Somalia’s capital Mogadishu, home to the country’s internationally-backed government, was hit Friday by a massive car bomb followed by a raid by gunmen, police and witnesses said.

“There is a large attack on the presidential palace. Initial reports are that a suicide car bomber hit the gate and exploded, then men with guns followed,” police officer Mohamed Ali told AFP.

The attack appeared to bear all the hallmarks of Somalia’s Al-Qaeda-lined Shabaab rebels.

“Security forces are dealing with terrorists who blew up a car… and there is exchange of fire. We have no details of the casualties but of course there are casualties,” said Ahmed Moalim Adan, a security official near the scene of the attack.

Witness Hussein Isa said the attackers were fighting inside the presidential compound.

“A suicide bomber rammed a car full of explosives into the perimeter wall of the presidential palace and another one with heavily armed men penetrated the area where the first one hit. There is heavy exchange of gunfire continuing inside the building but we cannot tell what is happening,” said the witness.

The sound of intense gunfire and sporadic explosions could be heard coming from the presidential complex, AFP reporters said.