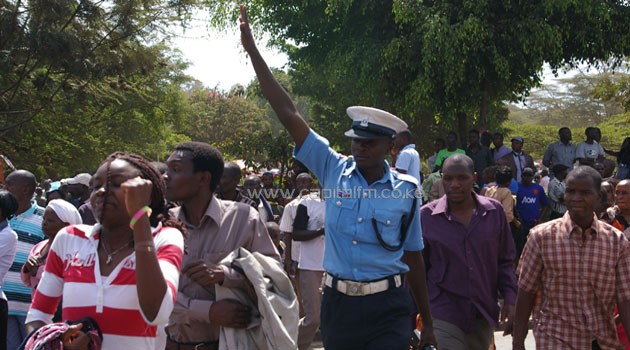 Kidero said that this will allow drivers and pedestrians to make use of the newly installed electronic traffic control system.

“From March 1 we are going to remove all the traffic policemen from the roads because it has been noted that the police sometimes cause confusion. The police will instead focus more on dealing with security matters in the county allowing the traffic lights control the motorists and pedestrians,” said the Governor, asserting that use of police officers and traffic lights concurrently was a waste of resources.

Kidero added that his government would revive the trans-city licenses for Public Service Vehicles (PSVs) to ferry people on longer routes.

“This will not only reduce the numbers of the vehicles from the city centre but it will also ensure that none of them are permanently stationed within,” he added.

Taxis are not left out as they will also have new regulations to comply with. “We have considered implementing a new regulation that prohibits cabs from parking in the city and they only come on call.”

“Taxis have taken up many of the parking spaces in the CBD yet they do not need to park in the parking spaces that they are taking up. These same taxis are the ones that cause traffic during the rush hours as they are parked even along the city streets.”

The Nairobi Governor last month formed an eight-member committee that is expected to come up with measures to decongest the city.

The committee was given a 60-day period to collect views from members of the public and stakeholders and then present an interim report to the Governor for approval.

“As a city we cannot continue operating like this, we want people to move freely and also operate in a manner that encourage investors,” said the Nairobi Public Transport Infrastructure and Public works County Executive Evans Ondieki.

He said that upon receiving the report, they will also establish a pedestrian framework on Nairobi roads saying, “Pedestrians are a despised group; nobody has respect for pedestrians an in reverse, they do not have respect for motor vehicles.”

“We have political goodwill from the County Government so we believe it is possible,” Matatu Welfare’s Association chairman Dickson Mbugua who is a member said.

Matatu Owners Association Chairman Simon Kimutai who is also a member of the committee noted that once a strategic plan was set up, transport was going to become affordable for city residents.

“We charge you more when we stay in traffic jam or when it rains because it is expensive to sit in a car where it would have done 30 minutes; you are doing in two hours. In all times consumers of products or services meet the cost,” he said.

“We need maximum cooperation in giving us good recommendations. I believe none of us has monopoly of ideas.”