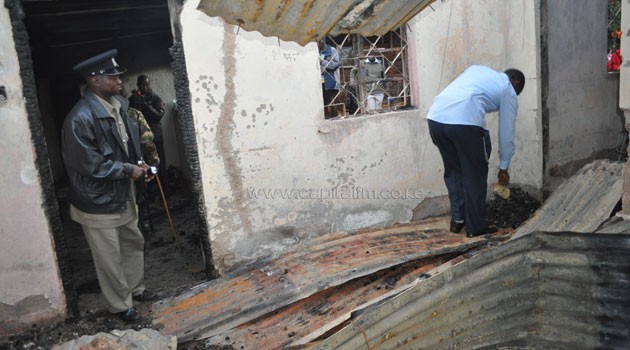 NAIROBI, Kenya, Nov 8 – Nyakach MP Aduma Owuor who in September dumped the body of an 80-year-old man, allegedly shot by cattle rustlers, at the Nyanza Commissioner’s doorstep has blamed cattle rustlers for the death of his parents.

Speaking to a crowd that gathered outside his parents’ torched home, Owuor said he was fairly certain the killing of his father and step-mother was done in revenge and to scare him off the rustlers’ backs.


“I am convinced that the killing of my parents is as a result of my steadfastness in the fight against cattle rustling in the constituency since I took over as the MP in the last general election,” he said.

He also held the area security agents jointly responsible for the death of his parents accusing them of colluding with the cattle rustlers.

He pointed to the citizen arrest and subsequent release by police of several youth who they suspected to be part of the cattle rustling ring.
“The youths we arrested even told us where they normally drive our stolen animals. It is sad that none of these youths were taken to court. They were released,” he said.

Area police boss Dismas Wanjala however refuted Owuor’s accusations saying they were yet to ascertain the motive behind the killing of Owuor’s parents or the identities of those responsible.

Prior to the attack on his parents’ home Owuor had expressed concern for his life before the National Assembly accusing security apparatus of not taking him seriously.

Owuor has been vocal where cattle rustling is concerned and even lauded the killing and torching of the homes of two men whom locals suspected of providing intel to cattle rustlers.

After addressing the crowd at his parents’ home the MP accompanied the bodies of his late parents to the Jaramogi Oginga Odinga Referral hospital mortuary in Kisumu where a post mortem is expected to be done.

While area police believe Owuor’s step-mother was killed while preparing supper, they have yet to establish whether his father died in the fire that engulfed their home or prior to it being set ablaze.

“The incident occurred shortly before 8pm when the woman was preparing supper. What is remaining for us now to ascertain is whether the mzee was killed before the house was set on fire,” Wanjala said.