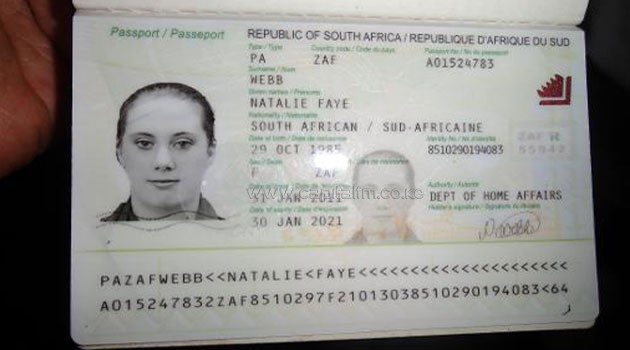 Samantha Lewthwaite – wanted by Kenyan police for alleged involvement in a separate terror plot – used the alias Natalie Faye Webb to get the passport, which was last used in February 2011.

“No we are not, no government intentionally provides cover, I hope, for terrorist groups, and it is certainly not the practice of the government or security forces of South Africa.”

She added that the Kenyan government had not yet contacted the South African government regarding the Westgate mall attack or Lewthwaite’s possible involvement.

“There has been no contact from the government or police or security services of Kenya indicating that a South African passport was used.

“I am not aware that the investigation is at a point where militants have been identified.”

The passport was issued in the Indian Ocean city of Durban.

The minister said it was not clear if Lewthwaite lived in South Africa, but she pointed to media reports suggesting that was the case.

A local terror expert and academic said earlier this week that Lewthwaite regularly travels to South Africa and stayed in South Asian suburbs of Johannesburg earlier this year.

Credit records show Natalie Faye Webb had at least three addresses in Johannesburg and ran up debts of $8,600 (Sh700,000).

Residents at the addresses denied Lewthwaite had lived there and could not remember having seen her.

The 29-year-old Muslim convert was nicknamed the “White Widow” because her husband was among the 2005 London suicide bombers who killed more than 50 people.

There has been widespread media speculation over her possible role in Nairobi’s deadly mall siege after Kenya’s foreign minister said a British woman was among the Islamist Al-Shabaab attackers.

President Uhuru Kenyatta later said the reports could not be confirmed.

Somalia’s Shabaab fighters have denied that any woman was involved in the Westgate attack.